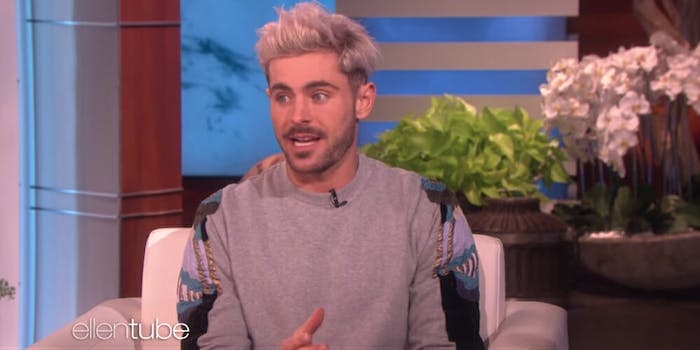 Many think the movie is glamorizing serial killer Ted Bundy.

Netflix’s film about Ted Bundy has had its share of criticism, as many think the film is glamorizing the serial killer. Zac Efron, who plays Bundy, doubled down on his efforts to defend the film and his role in it on The Ellen Show Tuesday.

“I am not into portraying a serial killer or anybody of this nature or glamorizing them in any way… it does not glamorize the killing,” Efron said. “This is an important thing for people to hear.”

Extremely Wicked Shocking Evil and Vile, which is set to be released on Netflix May 3, tells Bundy’s story from the perspective of Elizabeth Kloepfer’s (Lily Collins). Kloepfer is Bundy’s former girlfriend of six years, who became suspicious of Bundy while the two were together.

“I really wasn’t interested in playing a serial killer,” Efron said at the London premiere of the film. “I’m not in the business of glamorizing a horrendous person or his acts, but there is something unique about the way we went into the psyche of Ted and his longtime girlfriend Liz.”

There has been a renewed interest in the serial killer with Netflix’s recent release of Conversations with a Killer: The Ted Bundy Tapes and the announcement that Extremely Wicked Shocking Evil and Vile was in the works.

Bundy murdered at least 30 young women throughout much of the 1970s. Many people felt like those victims were being forgotten while Bundy was being glorified—especially after finding out that a young, attractive actor would be taking on the lead role as the serial killer.

imagine you had a daughter that was raped before being murdered and then then decades later an edgy thriller about the man who did it is made, where he’s portrayed as some cool, impressive guy rather than the disgusting animal he was, honestly sickening https://t.co/zi6KH2KkRb

I feel so bad for the families of the victims that have to sit there and see their terrors revived as a witty romantic thriller https://t.co/uP4y03XSBU

dude, the mere fact that they cast zac efron when he looks nothing like bundy just SHOWS the intent was to romanticize the sucker. showing he was a “normal” dude who was well-liked in his community and portraying him as a “sexy devil” are two different things

Bundy was said to be extremely charming, and that was likely how he got his victims to trust him before murdering them. So, there are some who think that this “charming” take on the serial killer is an OK depiction of Bundy and the story.

The director of the film, Joe Berlinger, has also come out to defend the film against its critics.

“You can’t watch this film and say that we’re glamorizing or glorifying Bundy,” Berlinger recently told Digital Spy. “What we’re doing is portraying the psychology of deception and betrayal.”