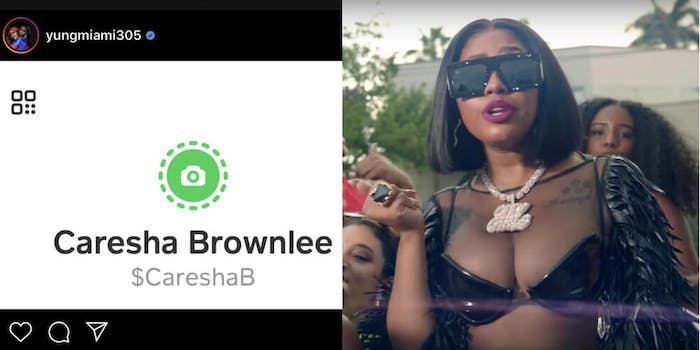 City Girls rapper Yung Miami is catching heat on Twitter for asking her Instagram followers to send her money for her birthday.

On Tuesday, the 26-year-old musician posted a screenshot of her CashApp and asked “all of [her] followers to send [her] $5” or $20, if they were feeling generous. She has since deleted the Instagram post. She also posted screenshots of fans sending her the requested amount, with many captioning their submissions with “happy birthday” messages.
The rapper has an estimated net worth of $1.5 million, according to rappers.money.

Many online weren’t happy about the notion of a celebrity asking her fans for cash. “Bitches on IG really sending money to Yung Miami, who makes millions?” Twitter user @BLACKGIRLMANI asked.

Twitter user @fullofmelaniin_ pointed out that people, likely with less money than the rapper, often post their PayPal and CashApp links to no fanfare at all. “Wow so y’all sending Yung Miami, a goddamn rich celebrity, money but if EYE a poor person had posted MY Cashapp no one would send shit,” they said.

Some even posted their own CashApps. “Fuck it y’all gave yung Miami money fuck with me,” Twitter user @i_ThrewAParty said.

Points were made. In Yung Miami’s case, money was also made.