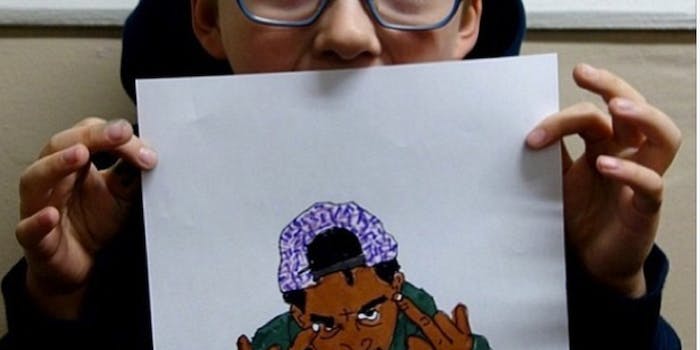 Yung Lenox is living the dream.

This year, Notorious B.I.G.’s Ready to Die celebrates its 20th anniversary. Seattle artist Yung Lenox recently did a colorful tribute to Biggie. He is 7 years old.

Nevermind that Yung Lenox wasn’t even alive in 1994. Or in 1984, when Minor Threat’s self-titled compilation album was released. He drew the cover of that one, too.

His Instagram page is a gallery of iconic album covers from the past 30 years. Lenox’s drawing obsession was fostered by his dad, Skip, a fellow artist. Questionable parental tastes are often forced on kids, but in this case, Skip’s excellent record collection brought out and shaped Lenox’s talents. In the past year, he’s hit all the greats: A Tribe Called Quest, Ol’ Dirty Bastard, UGK, Wu-Tang Clan, Bad Brains, Slayer, Prince. He’s partial to Ghostface Killah, because of the Iron Man connection.

Lenox’s talents have attracted enough attention that he’s sold out of limited-edition prints. Around the holidays, he was able to use some of the money from prints to help buy toys for less fortunate kids.

When he’s not drawing musical heroes, he’s posing with them. Yung Lenox also had his first solo show last summer. Do you remember what you were doing when you were 7?