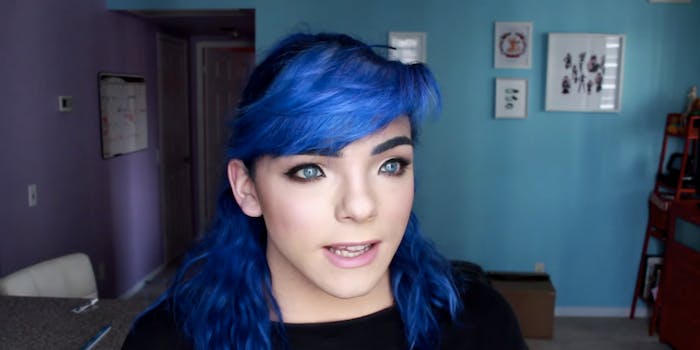 YouTube makeup artist comes out as transgender in powerful video

YouTube makeup artist and vlogger Stef Sanjati opened up to her followers about her identity, coming out as a transgender woman in her most recent video.

Sanjati began posting makeup tutorials and video game content last year, but has branched out on her channel to include social commentary as well. Last month the Canadian-based creator alluded to her transition in a vlog on gender identity for the collaborative channel Perfect Androgyny.

While the bigger name YouTubers with followings in the millions often get the attention for their coming-out videos, more niche YouTubers like Sanjati are encouraging open and honest discussion among their fans. Just like when Harry Potter activist Jackson Bird came out earlier this year as transgender, fans have taken to Sanjati comments to both congratulate her on her openness, and discuss their own gender identities and questions.”I’m only 14 and I have no clue what gender to identify as,” writes follower Prince Saryna, who goes on to describe their various emotions about their gender. Several fellow fans chimed in with support and advice about accepting oneself.

YouTubers who come out as transgender are not only inspiring their community, but also making their mark more widespread. Recently Oscar-winner Eddie Redmayne cited Bird’s coming-out video as influential in his process for portraying a trans woman in an upcoming film.

Sanjati’s only been out for a day, so she’s not inspired any Hollywood actors just yet, she is pushing back at terminology and phrases around transgender people and transitioning, speaking out against the idea of “feeling trapped” in her body.

“I will not tell you I feel like a boy trapped in a girl body,” she explained. “This is my girl body. When it has breasts on it, it will still be my girl body. It’s not going to be a different body. I’m not switching bodies. I’m not trapped. I am more free than I have ever been in my life.”