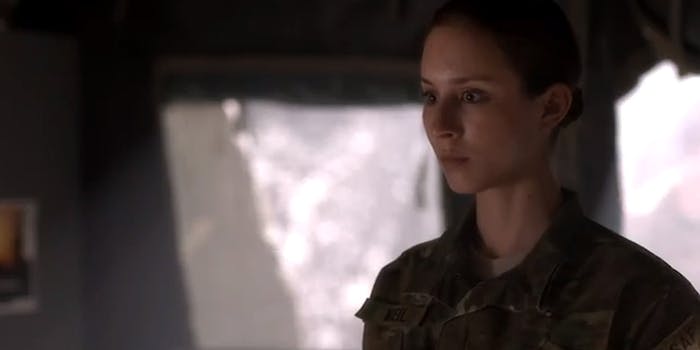 "Lauren," a three-part series airing on women-focused YouTube channel WIGS, focuses on the difficult process of reporting a rape in the military.

The women-centric YouTube channel WIGS already offers shows featuring complex characters, and their latest web series proves that they are not afraid to tackle tougher issues.

“Lauren,” a three-part series featuring Pretty Little Liars’s Troian Bellisario as the title character and The L Word’s Jennifer Beals as Major Jo Stone, gives viewers an in-depth what women in the military often deal with when they report sexual assault or rape to a superior officer.

Stone initially tries to explain the reality of the situation to Lauren: if she follows through with reporting the rape, she could be exposed to judgment. And even then, a conviction is no guarantee that justice will be served.

“Even if the men are deemed guilty, they’re likely to suffer a reprimand or a slight pay cut, nothing more,” Stone tells Lauren in the video. “But what will happen to you may expose you to repercussions for your entire career.”

Lauren wants to do right and insists that she wants to file the report but will ultimately respect the decision that Stone makes.

There were 3,191 reports of military sexual assaults in 2011, but most sexual assaults are not reported, and the Pentagon estimated that the actual number was closer to 19,000 cases, according to CNN.

Beals and Bellisario hope that their series will bring more exposure to the issue, which is the subject of a class action suit from current and former members of the military who were sexually assaulted and aim to make the Pentagon revise how it handles sexual assault cases.

The first episode, titled “The Report,” ends on a cliffhanger as Major Stone is left to decide what to do with Lauren’s report and Lauren, still traumatized by the attack, relives it in her head.

Parts 2 and 3 of “Lauren” air this Wednesday and Friday.

Warning: the video below contains strong language, and discussion and depiction of rape.