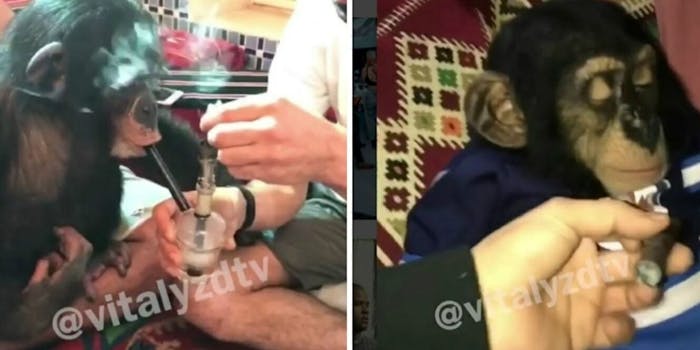 A YouTube star with nearly 10 million subscribers posted a video to Instagram and Twitter that appeared to show him getting a monkey high on marijuana, and much of the internet is outraged. Some on Twitter and Instagram are also calling it animal abuse.

YouTuber VitalyzdTv, who has 9.6 million subscribers, posted the video below, in which a monkey takes a few hits from a bong with a number of people laughing in the background and asking the monkey, “You high, bro?”

Later, the monkey is filmed eating, and he’s asked, “Now, you got the munchies, huh?” The monkey is also filmed being tapped awake and asked if he wants to hit “the blunt, bro.”

When your friend smokes for the first time @cuteness

The YouTuber whose name is Vitaly Zdorovetskiy conducts prank and workout videos on his channel, which has accumulated more than 1.5 billion views. He’s been arrested for inciting a fake bomb threat, and he’s been arrested for interrupting pro sports events. He’s also been accused of making racist and sexist videos.

In his monkey video, people were livid, calling the stunt animal abuse.

Not everybody, though, was appalled. Some thought it was funny.

Eventually, though, the People for the Ethical Treatment of Animals (PETA) was tagged on Twitter.

Responded PETA on Twitter: “Thanks for reporting this! We’ve passed it onto our Cruelty Investigations Department.”