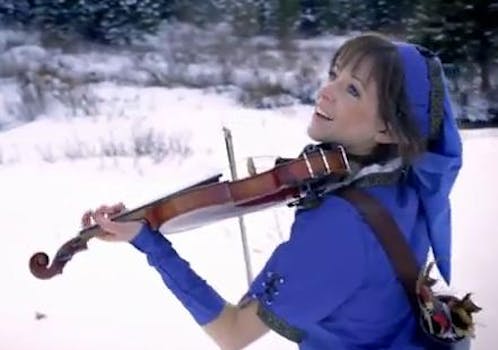 Frolicking, violins, horses, dungeons—what's not to like? This Zelda takeoff seems to have all the right stuff.

In YouTube Right Now, the Daily Dot looks at videos that catch our eyes, push our buttons, or move the dials—and that you’ve just got to watch. Right now.

A video of a cute and cheerful girl doing a smart thing—combined with video game lore—is about to go viral.

And why wouldn’t it, given the nature of online users?

“Zelda Medley,” played by Lindsey Stirling, follows the male character Link. Zelda frolics through various scenic backgrounds while playing her violin. Sometimes, she is on a horse, other times she is exploring a dark dungeon with a flaming torch in her hand.

There are no lyrics or dialogue, but the colorful shots—featuring waterfalls, mountains, and autumn colored trees—combined with Stirling’s pantomiming and musical performance, are captivating.

At less than 30,000 views, “Zelda Medley” has already been featured on gaming and nerd-culture sites Kotaku and Topless Robot so it is only a matter of time before it spreads across the Web.

“Zelda Medley,” uploaded yesterday, is also timely; Skyward Sword, the latest installment of the popular video game after which this musical medley is based, is set to be released in the United States on Nov. 20.

“With the YouTube videos that I do, I as often as I can, try and pick ‘hot topics,’ and make videos on them, just so I can get the most exposure as possible” wrote cinematographer and editor Devin Graham on his blog about the video.

“*puts on hipster glasses* it’s so cool to watch a viral video before it has gone actually ‘viral’.” commented YouTuber TheScoutingSniper.