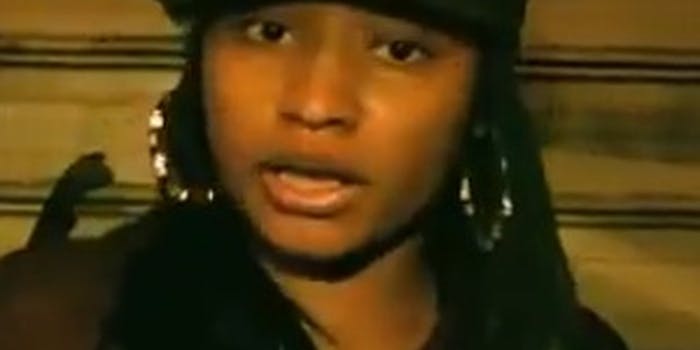 Now that Nicki Manaj has risen to fame, people online say they like the old Manaj (featured in a video that surfaced yesterday) better. Fans: you just can't please them.

There once was a time when rapper Nicki Minaj didn’t have purple, pink or blue hair, wasn’t donning fanciful costumes, and acted, well, normal. Footage of such a time surfaced online last night, and as expected, the Internet is going wild with the discovery.

Roughly 17 hours ago, a video of Nicki Minaj rapping on the streets of what appears to be New York City, babyfaced, with black hair and average clothing, was uploaded onto World Star Hip Hop (WSHH).

From there, YouTuber CALIZOEvideos uploaded a copy to YouTube. Perhaps to save face, roughly three hours later, a better copy surfaced on the YMCMBOFFICIAL account. (That account appears to be associated with Young Money Entertainment, Minaj’s record label.)

The exact date of the video is unknown, but Minaj does say “hit me up on MySpace,” a social network site whose heyday was years ago.

YouTubers and World Star Hip Hop users have taken to guessing what cosmetic surgery procedures the rapper partook on her way to fame. Others couldn’t get over how much more they liked the old Minaj, with some getting quite passionate about the “state of hip hop” because of it.

“I guess Barbie killed the old Nicki…. -_-” wrote Just Daneen on WSHH, in a comment that received many likes.

“Old﻿ nicki <3 i wish she would come back” wrote YouTuber TheLCloo56 on a copy of the video.

Not even 24 hours old yet, the original video has been copied dozens of times already. (YouTubers, are betting that this video goes viral, and want in on some of the ad revenue profits.)