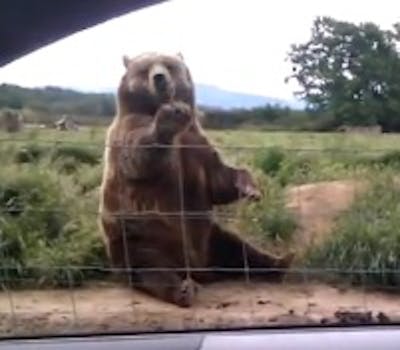 Bears—the number one threat to America, according to Stephen Colbert—are now mimicking human idiosyncrasies, like hand-waving.

Or so it appears from a seven-second video on YouTube currently clogging the Internet tubes.

Uploaded last year by homefry815, “Polite Bear Waves Hello” was discovered by social news site Reddit yesterday in multiple posts. Views of the waving bear shot up from around 1,000, to over 400,000 in a 24-hour period—and viewers are still tuning in.

The bear, who resides on the Olympic Game Farm in Washington, is 20 years old and named “Twinkles,” wrote Robert L. Beebe, the President of OGF, in an e-mail to the Daily Dot.

“Twinkles was never formally trained to wave or do any of her other actions–she has learned from the tourists and other bears” wrote Beebe.  “Bears are an extremely intelligent animal with very unique characteristics and personalities.”

Beebe explained the waving comes from tourists tossing wheat bread to her. That “reinforces the action–this is called positive reinforcement and very effective for both the animal and trainer.”

Originally a sanctuary for orphaned wildlife in 1942, Olympic Game Farm served as a filming location for Walt Disney’s nature films and opened to the public in 1972.  The farm allows only wheat bread, authorized by the USDA, to be handed out by tourists to the animals, which include yak, llama, bison, elk, and deer.

“Polite Bear Waves Hello” is just one of many videos on YouTube of the bears on Olympic Game Farm waving to passerbys.