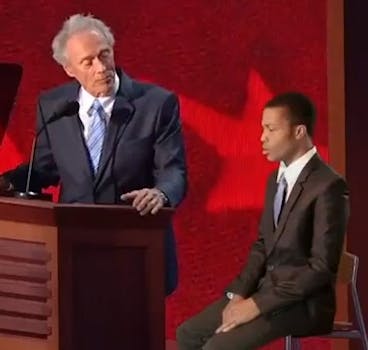 Maybe there was someone sitting in Barack Obama’s chair at the Republican National Convention (RNC) after all.

Clint Eastwood was pilloried for a bit during his RNC presentation in which he conducted an interview with an empty chair, where Obama was apparently seated. The scene sparked the “Eastwooding” meme as well as a parody Twitter account, @InvisibleObama.

What you may not have realized is that there actually was someone in the seat: Eastwood’s imaginary friend, advising the actor not to tell the world of his existence.

Meanwhile, the real Obama’s reaction to Eastwood’s speech was simple: a tweet showing him sitting in a presidential chair along with the caption “This seat’s taken.” That tweet turned out to be the most retweeted message of any related to the RNC, with more than 53,000 retweets as of Monday.