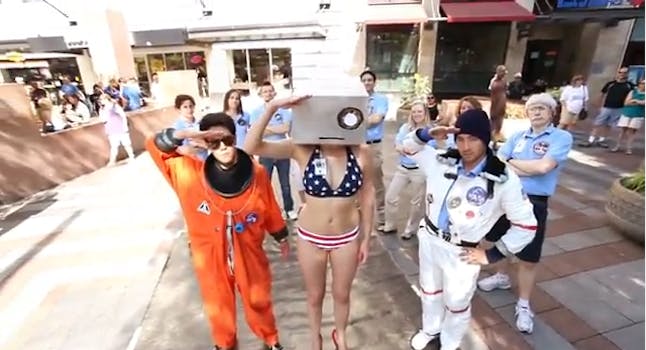 An LMFAO parody celebrates the landing of the Curiosity Mars rover.

It’s been over a week since NASA landed the rover Curiosity on Mars, but it’s still on the Internet’s radar. It’s inspired fanart, Canvas remixes, and a parody Twitter account,  and Bobak Ferdowsi, activity lead for the Curiosity project, became an Internet sensation after his unique hairstyle captured audiences.

But now Ferdowsi and the rest of the Mars Curiosity team is getting the LMFAO treatment with “NASA and We Know It.”

Produced by Alexander J.L. Theoharis, the self-proclaimed NASA fan behind the YouTube channel Satire, it features the Curiosity crew leading up to the rover’s landing, led by David Hudson as Ferdowsi.

Once the rover lands, the NASA team naturally celebrates by break dancing outside the building while one of them dances with a robot box over her head and an American flag bikini as they name drop late astronomer Carl Sagan and astrophysicist Neil deGrasse Tyson.

We might debate whether or not Curiosity is still relevant, but with a catchy tune and clever lyrics, our curiosity for Curiosity might just last a little longer.