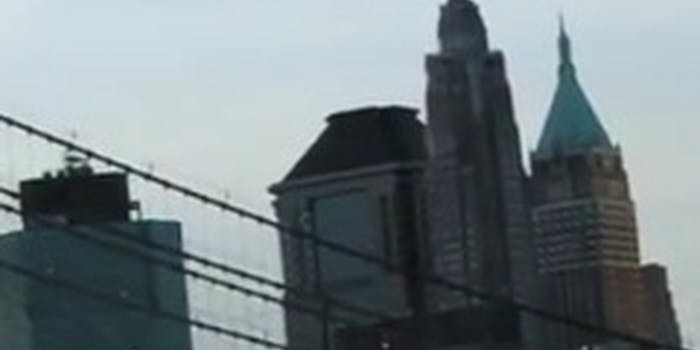 Unlike the teaser for Ferris Bueller, this is a real, extended trailer for the forthcoming film Chronicle.

Another advertising gimmick has managed to enchant the Internet. Unlike the Ferris Bueller teaser that happened to be for a car commercial, “Flying People in New York City” is for a real movie: Chonicle.

The 2:38 video features three remote controlled airplanes outfitted to look like people. They dive, swoop, and float about New York City’s skyline, specifically the Brooklyn Bridge and the Statue of Liberty.

The video could almost be footage of an art piece—if it weren’t for the dubstep undertones provided by the video’s soundtrack.

Uploaded on Monday morning, the video has already received considerable attention from Reddit and on YouTube. The view count is stuck at 301, which indicates traffic volume being too much for the site’s servers.

TechCrunch, one of the first to write about the video and debunk the art theory, struggled to understand how viewers would know this video was related to the movie Chronicle. Others on Reddit and YouTube were amused at the “trolling” aspect of the video—imagining scenarios of people viewing the planes, thinking they were real people, and crashing their cars or dropping their lunches.