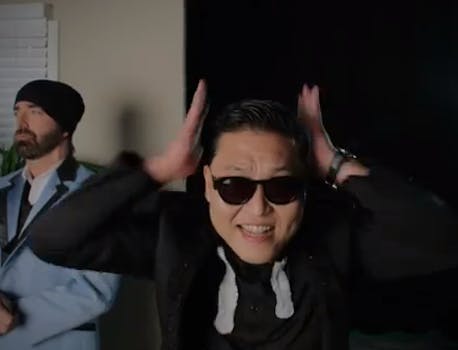 Here's what happens when you combine YouTube's top 100 stars with two of the site's biggest hits to date.

Not that we’re exactly happy about it. That’s just the way the coverage cookie crumbles. When a YouTube video’s bordering on becoming the first clip to ever eclipse 1 billion views, it’s altogether necessary that we spend at least a month of our cumulative year watching this somewhat pudgy Korean dude horsey dance his way straight through the record books.

Evidently, 50,000 is not a high enough number for the brass at YouTube, who ceremoniously decided that this year’s Rewind video should bookend itself around “Gangnam Style” with a healthy serving of Carly Rae Jepsen‘s “Call Me Maybe” mixed in between.

The only saving grace is that this round we don’t actually have to watch Psy pull off all the ferocious feats. Instead, such lovable YouTube personalities as Grace Helbig, DeStorm Power, Annoying Orange, iJustine, Hannah Hart, and Freddie Wong show up to handle all the half steps and horsey dances, with Geek & Sundry‘s Felicia Day headlining the “Call Me Maybe” sequence in the middle.

Of course, Psy shows up for a few sequences. He smashes Walk Off the Earth’s guitar rather unceremoniously at the beginning of the clip and drops in to say “Rewind YouTube Style” at some point, as well.

Posted on Monday, “Rewind YouTube Style 2012” has already racked up 2.2 million views, which means it’s well on its way to eclipsing the total views of last year’s Rewind video, which centered around Rebecca Black, who by now has largely been forgotten by mainstream media.

The whole thing’s just a few seconds longer than four minutes and features at least one really endearing shot of Hannah Hart and the guys from Epic Meal Time throwing food, which is altogether better than anything we’re getting from Psy at this point.