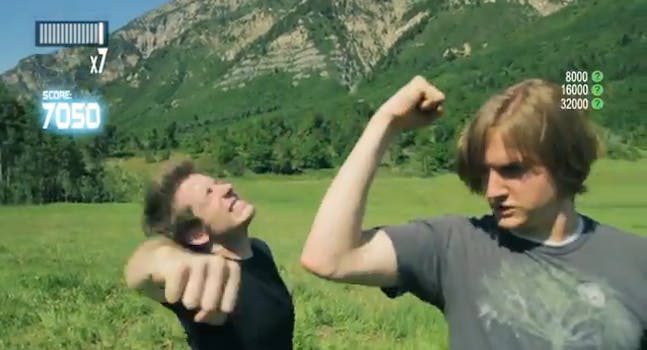 Tired of video games constantly asking for money for downloadable content? Special effects YouTuber Warialasky applies it to “real life” in this parody where DLC pop ups appear for everything from access to the game itself to a combo kick. In this game of life, if you don’t have the points, you won’t go very far.

AsapSCIENCE is back this week with a cure to the pesky hangover you got after binge drinking. You might swear that you’ll “never drink again” but oftentimes it’s harder than it sounds. asapSCIENCE’s Mitchell and Gregory go back to the smart board to show that a lot of curing a hangover is preventing it in the first place with what you eat.

Justine rants about a recent trip to get a T-shirt after spilling on the one she had on, and she becomes increasingly frustrated as she describes her interaction with the cashier, who won’t sell the shirt until she received some form of contact information. “I JUST WANT TO PUT THIS T-SHIRT ON MY BODY!” Justine exclaimed.

My Damn Channel’s DailyGrace is in Anaheim just in time for VidCon, and she’s turning on every contraption and opening everything in her hotel room from a phone to the TV to chipping a block of ice as she advises viewers to use everything you don’t have in your normal life.

In the latest episode of The Lizzie Bennet Diaries, Mrs. Bennet isn’t too happy that Jane returned from Bing Lee’s after staying for only one night. Charlotte and Lizzie also discuss what they plan to do at VidCon this weekend.