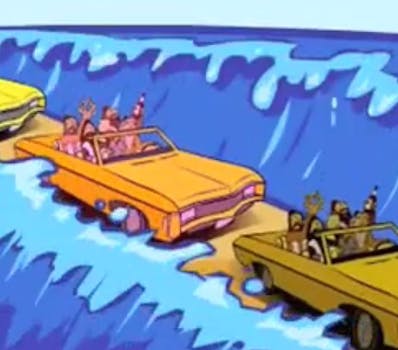 Still need a little help getting into the spirit for Passover? Here’s a quick primer of questionable taste.

Happy Passover! These light-hearted YouTube holiday additions should help get you in the festive spirit.

Some might first this video, titled “Who Let the Jews Out,” slightly offensive, but it’s not half as bad as the song from 2000 that inspired it. “In this retelling of Hebrew scripture, it’s is a pipe-smoking sheep that tells the Egyptian king of his fleeing slaves, who in turn ride through the parted Red Sea in ‘70s convertibles flashing what appears to be Jewish gang signs.

They call themselves KOLISH, and this mock-Jewish pop group is too cool for Passover rules—or at least the rule about eating Chametz. They eat Chametz prematurely, because they don’t want to deal with the constipation of the past. We don’t get it either.

Lisa Schwartz, sometimes called the Jewish, female version of Shane Dawson, re-enacts what it’s like dealing with relatives, particularly her Aunt Sophie, during Passover. She also talks about constipation.

Jewish Treats has an amusing rendition of Miley Cyrus’ “Party in the U.S.A.,” except appropriately titled “Best Seder in the USA (The Passover Song).”

Are you excited to eat Matza this Passover holiday?  Matzo Man can’t wait to be eaten by you, and sings so, in the tune of the Village People’s “Macho Man.”

When Passover ends, do you find yourself with more boxes of Matza than you know what to do with?  Michelle Citrin and William Levin sing about  and the 20 different things you can do with Matza in this popular four-year-old acoustic song and video.