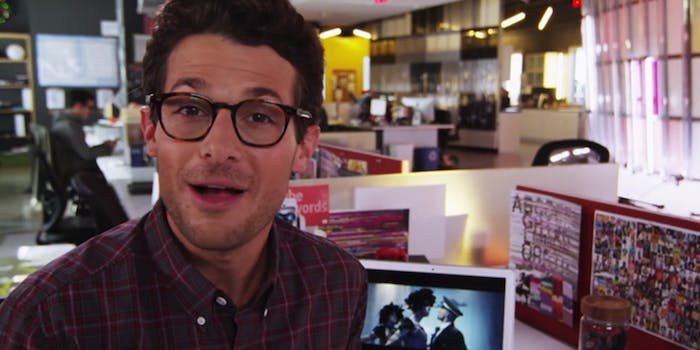 Will this foray into original programming fare better than the YouTube Music Awards?

On Tuesday, YouTube debuted its new evening news show, YouTube Nation, which functions as a five-minute round-up of the best videos of the day. Highlighted in the first few shows were Joseph Gordon-Levitt’s new web series, the guy who’s dancing his way across China, and the follow-up to Don’t Hug Me I’m Scared.

Of course, the real goal here is ad revenue for Google. The company hopes an original show like this one will fare better than YouTube’s recent foray into live programming with the YouTube Music Awards. DreamWorks CEO Jeffrey Katzenberg explained the show won’t be DreamWorks branded, but more of a “daily lighthouse.”

“We think it is one of the places of greatest opportunity for any content creator over the next couple of years,” he said.

But will people watch? While the concept isn’t necessarily groundbreaking, it’s executive produced by Steve Woolf and Zadi Diaz, formerly of the Internet culture show Epic Fu, and boasts a team of 10 employees who sift through the site’s content for interesting videos and stories.

The show’s host, Jacob Soboroff, formerly of HuffPost Live, is an affable guide, and the segments are well-edited for short attention spans. In an interview with USA Today, Soboroff explained that “[t]here’s a generation of young people in this country who have grown up with their favorite stars not on the Disney Channel, not on MTV, but on YouTube.” (Reps from YouTube did not return an email for comment.)

As a landing page for all the day’s best videos, it could be a draw for frequent YouTube users who don’t want to sift through Twitter and Facebook, but Soboroff’s also talking about bridging a generation gap of older and younger viewers. That could be a more difficult task.