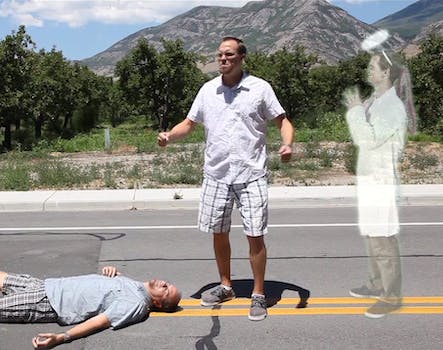 With the family friendly YouTube series, Kid Snippets, the Roberts brothers and Richard Sharrah have mastered the art of  adult-constructed child's play.

Some of the funniest fathers on YouTube are acting like children. In fact, they practically are children—their voices are, at least.

Thanks to BoredShortsTV—the Utah-based brotherhood of John, Brett, and Randy Roberts, plus Randy’s former NYU roommate Richard Sharrah and a whole slew of kids from the greater Provo area—YouTube is now the leading hub for all instances of adult-constructed child’s play.

It’s where men go to be boys again, the place where they can dress up and reenact a nativity scene, get sent to the principal’s office, or fight over who gets to carry the Olympic torch.

“We were all fans of the Drunk History series on YouTube, which is hilarious,” brother Brett Roberts told the Daily Dot. “Randy was going to NYU and wanted to enter a film festival in New York, and he decided to make one that’s just like that, just a little more family friendly.”

The result: Kid History, a nine-episode series that had the three brothers acting out real-life scenes from their childhood with scripting, narration, and voiceovers provided by their children. The first episode detailed an episode in which Randy and John came across a driver who was having a bad day. The second recounted the two brothers’ attempts to get a friend away from his mom so the three could toilet paper houses.

“They loved it,” Roberts said of the kids’ involvement. “They have a good time. It’s simple. They just tell a story.”

Roberts said that the program launched with the creators’ own kids handling all of the kids parts but that they’ve recently begun to pull contributions from other children in the Provo area.

“We didn’t want to get them so into it that we started raising child stars,” Roberts said.

“We didn’t want any Lindsay Lohans in our family.”

The community approach worked. In the months since, Kid History has evolved into Kid Snippets, two-minute shorts that have the kids creating their own stories entirely.

“Those are just random imaginations,” Roberts said. “All we do is give them a scenario: ‘You be a salesman and you be somebody answering their door.’ And they just go.”

Sometimes the fathers don’t even have to contribute as much as a premise.

“The one where there’s a ghost, that one was completely thought up by the kids.

“Sometimes we’ll have them make up the story and it’ll take them a while to get the plot going. Once we get the plot, we’ll tell them to do it again. By then, they’re able to go through the story a whole lot easier.”

Three weeks ago, the brothers hired Ryan Halderman to handle the franchise’s filming and editing, making him the first full-time employee on the BoredShortsTV network.

“We all have jobs,” Roberts explained. “Randy thought of this concept while he was in dental school. He’s a dentist now, and John and I are entrepreneurs with stable, fulfilling jobs. We’re trying to make it so that we can continually fund the creation of content using the revenue generated by the content itself.”

Now that Halderman’s in-house, the BoredShorts crew is looking towards expansion. Roberts said that the crew plans to maintain the strenuous production rate of one Kid Snippet episode each week while also rolling out a few new franchise ideas.

“It’s just a hobby, but we’ve managed to make ourselves a little bit of a business,” he said. “Now that we’ve got someone in place full-time to film and edit and make things look nice, it opens the door for other ideas.”

Roberts wouldn’t disclose what exactly the new adventure entails but stressed that the kids won’t be involved.

“No, we’ll be the ones writing this one,” he said.