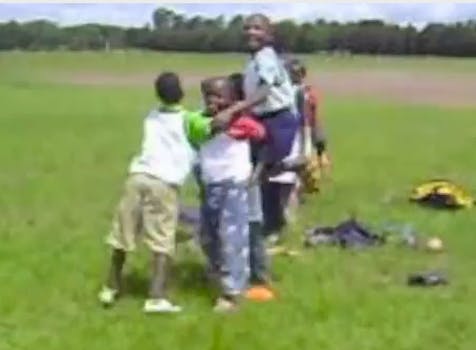 Even Boston Red Sox fans can appreciate this charming, perfect reenactment of that fateful October night in New York.

It’s an ending to a game that baseball will never forget.

Down to their final out in the 10th inning of the 1986 World Series, the New York Mets rallied to put runners on second and third base when Boston Red Sox pitcher Bob Stanley threw a wild pitch past Mookie Wilson that brought Kevin Mitchell home and advanced Ray Knight to third.

A few pitches later, Mookie Wilson grounded a ball down the first base line that went through first baseman Bill Buckner’s legs. Knight came in to score. The Mets took Game 6 and eventually the series two nights later. The Red Sox were forced to play another 18 years before winning their first world series since 1918.

The stories surrounding that fateful October night in New York continue to this day.

Halfway across the world in Kenya, a group of students have reenacted the famous scene using tennis racquets and orange pinnies. The group—presumably led by the white man who appears to be directing the scene at the 22-second mark—plays out every magical moment with award-winning precision, making sure to get everything from Kevin Mitchell’s jubilant celebration to Ray Knight’s picturesque grab of the helmet as he’s crossing the plate.

Posted onto YouTube Wednesday, the video has racked up over 12,000 views (though view counts are currently frozen, a sign that the video is getting serious attention).

“The students were interested in making a movie about a famous sporting event,” video uploader acro31 wrote in the comment section. “After watching both real live clips the students voted on Buckner’s error over the ‘Music City Miracle.’

“They loved the experience and want to make a second movie.”

If the class does end up making a second, odds are they’ll have an audience ready and waiting on its release. The 1986 World Series reenactment has a tremendous likes-to-dislikes ratio (167 to 3) and comments have been unanimously positive—even the ones coming from Boston fans.

Unofficial voting for the next video reenactment has already started in the video’s comments section. The early frontrunner: anything but Michael Jordan’s final shot to beat the Jazz.