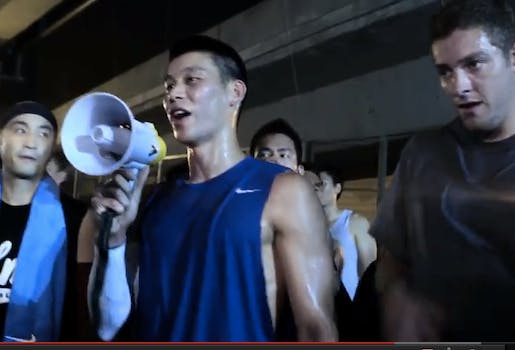 Jeremy Lin is, if nothing else, a man of the people.

A new video posted to his official YouTube video works as a cross between a scripted film and a documentary.

Bored at a hotel in Taipei, Taiwan and unable to get past the mobs at his hotel, the basketball sensation decided to grab his former Golden State Warriors teammate David Lee, sneak out wearing a giant Hello Kitty mask, and play streetball with some locals.

Lin’s a star in Taiwan, where his parents were born, even though he’s only started 25 games in his NBA career and missed last season’s playoffs with a knee injury. He’s no stranger to YouTube: After he broke out as a surprise talent in late 2011, fans discovered he’d already recorded a trove of funny videos.

Though the dialog between Lin and Lee is clearly scripted, the basketball isn’t. Neither is the spliced-in media footage nor the fanatic response of gawking fans, most of whom capture the event on their cameras.