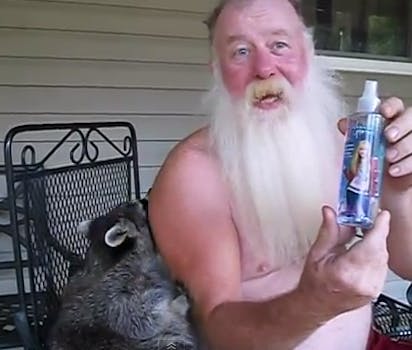 Plus, professional driver Ken Block tears up the streets up of San Francisco and Andrew Hales demonstrates "Handshake Confusion."

No sense of what to make here, but this short clip of a bearded hillbilly trying to ward off a nosey raccoon with a few sprays of Hannah Montana perfume has already been seen over 400,000 times since posting to YouTube last week. It’s so popular that the unidentified ZZ Top knockoff has already tried his hand at a follow-up video, which posted yesterday.

What could be better than treating a major city’s streets like your own personal playground? In this video from DC Shoes, professional driver Ken Block takes to the hills of San Francisco in a souped up Ford Fiesta to show viewers just how thrilling city driving can be when the rules don’t apply. Just remember not to try these moves yourself.

If there’s nothing better than a really well-executed handshake, there’s certainly nothing worse than a flub job. In this installment of Losing All Hope Was Freedom, merry prankster Andrew Hale proves just how awkward it can be when a dude thanking strangers for a favor tries to get too hip with the handshake. It’s almost as bad as that time Kevin Love tried to high five Wes Johnson.

For those who scoff at the idea that Betty White and her collection of old hens were the quintessential group of friends celebrating their golden years, New York City artist Kevin Bapp presents “Super Golden Friends.” The 45-second clip finds superheroes Batman, Robin, Superman, and Aquaman commiserating, jumping for joy, and sashaying their way back to vibrancy just like the Golden Girls would so often do—all set to that wonderful remake of Andrew Gold’s “Thank You For Being a Friend.”

Interesting title, right? So what’s it mean? According to SourceFed’s Steve Zaragoza and Joe Bereta, there’s a new study proving that muscle mass tends to shrink in space, a reaction that suggests your muscles may age better on earth than they do in space. Better means faster, in this case, which means that your body’s doing better to preserve itself if you’re out beyond the stratosphere.