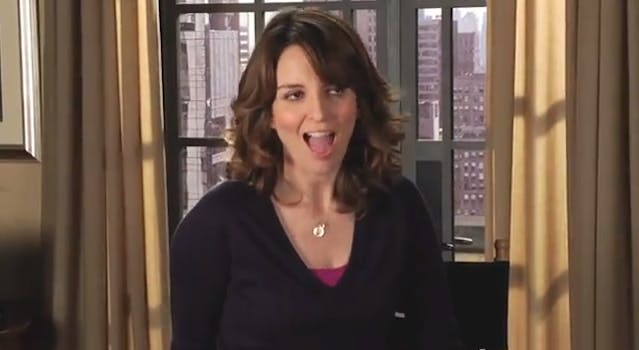 Tina Fey says she doesn't have a secret Twitter account, and the site is "wasting the Internet."

Tina Fey is one of the celebrities we wish would join Twitter (especially after she and Amy Poehler nailed it at the Golden Globes on Sunday), but don’t count on it. She’s brutally honest about the site that’s “wasting the Internet” as she answers a couple of fan questions.

The next time you need some musical inspiration, look no further than a supply closet and out your window. YouTube musician Andrew Huang created a song by only using a rock, some paper, and a pair of scissors.

We may not have flying cars in two years as Back to the Future: Part 2 predicted, but Terry Barentsen demonstrates that while his DeLorean might not be able to get to 88 miles per hour, it’s one step above the Hoverboard—yes, it hovers over water.

RWJ is up to his usual shenanigans on “=3,” but this time he’s joined by Ian Hecox and Anthony Padilla from Smosh. Although Smosh recently ousted RWJ as YouTube’s most popular channel, there’s no hard feelings between the YouTubers as they poke at each other and themselves.

5) Symphony of Science, “The WTF Singalong”

A couple of reporters ask a well-pondered question as they’re caught in the middle of the funny-yet-dreaded reporter blooper thanks to some autotuning from Symphony of Science.