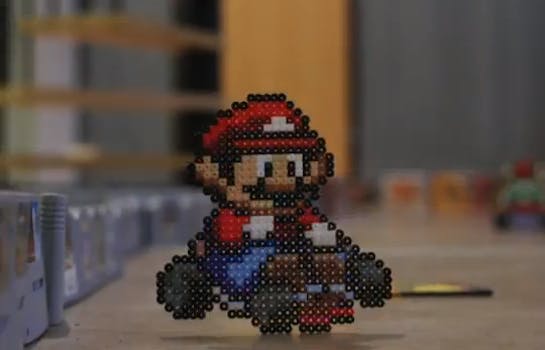 Mario's back with another epic adventure. Plus, new videos from asapSCIENCE and Lindsey Stirling.

Mario is off on an epic adventure through a suburban town, a supermarket, and a car chase as classic levels from Super Mario World and the original Mario Kart are recreated with beads and and stop-motion animation.

Hip-hop violinist Lindsey Stirling is locked in a room with no way out and surrounded by boxes full of light bulbs and candles. But once she discovers her trusty violin, she truly lights up the room—a feat that might come in handy for her during a blackout.

3) Glove and Boots, “A World Without Twinkies”

While the rest of us may have been able to digest the loss of Hostess products, Mario is still a little Twinkie-crazy, and Fafa offers his guide (echoing the Five Stages of Grief) in order to get through the crisis.

4) AsapSCIENCE, “The Evolution of Life on Earth”

Educational duo AsapSCIENCE condenses the evolution of the earth into a 24-hour day through claymation. While humans have been around for millions of years, our entire human history only makes up a few seconds of the 3.8 billion year history.

New Zealand officially has Hobbit Fever. One meteorologist dresses up as an elf and does the summer forecast entirely in Sindarin, an Elvish language created by Hobbit and Lord of the Rings author J.R.R. Tolkien.