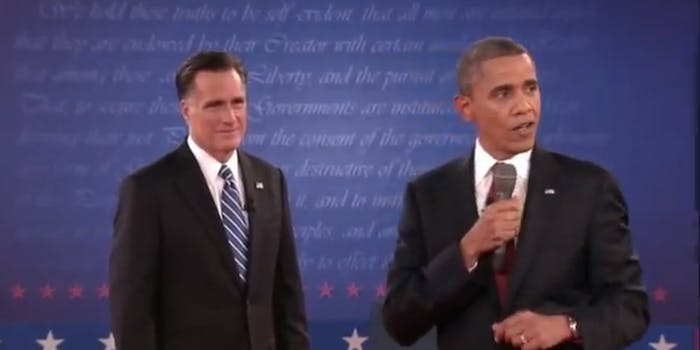 Here's our pick of the funniest ways to look back on the 2012 presidential election.

The anonymous mastermind behind “Bad Lip Reading” is back just in time for Election Day. With the best of the political debates together in one video, we can now see everything we may have missed, whether it’s CBS’s Bob Schieffer craving bacon-filled rolls or the candidates’ childish insults.

President Obama and his two new best friends rallied in Ohio Monday night where Jay-Z performed his big hit “99 Problems” for the crowd of Obama supporters. Only this time he substituted “bitch” for another, more timely word.

In the style of the old Schoolhouse Rock! educational videos of the 1970s, this homeless Uncle Sam fills you in on how voting really works: The Illuminati’s somehow involved and your vote will eventually get iPads, Kindles and Nooks sent back to the U.S.

The Fine Brothers took a multigenerational approach to their series for the first time as both teens and elders, many who have already made up their mind, give their candid thoughts about the 2012 election and the issues at hand.

Obama and Romney are at it again. Using everything in their arsenal, the two duke it out Streetfighter-style with appearances from Joe Biden, Paul Ryan, Seal Team Six and Romney from 2006. If you K.O., it might cost you more than a quarter to play again.