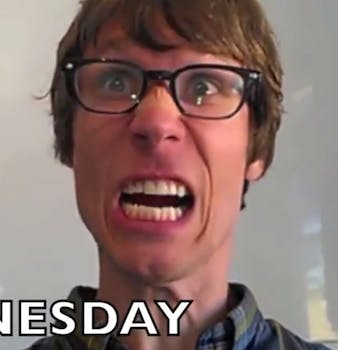 Pleated-Jeans' Jeff Wysaski gets baked, toasted and fried and delivers a heaping spoonful of kitchen-themed puns. Plus: Should paper airplane flying be an Olympic sport?

1) Pleated-Jeans, “Pun Hunting in the Kitchen”

How many puns can you come up with in the comfort of your own kitchen? Here’s guessing Jeff Wysaski can come up with more. The über-popular tumblr goes hunting through the microwave, coffee cupboard, and lazy susan and comes up more than enough puns to stick in the oven. “Hey, go fork yourself!” “That’s some whisky business,” indeed.

The only thing better than an ultimate trampoline fails compilation is an ultimate guys walking into goalposts compilation. That may come later, but for now, supercut mastermind World Wide Interweb’s newest clip will suit us just fine.

3) Timothy DeLaGhetto, “Hit It From the Back 2 the Future”

Timmy DeLaGhetto’s found himself a time machine, and brought along his buddy Rick Shucks to go back in the day to their most desirable times and places. Shucks heads back to the time of Dr. Martin Luther King, Jr. to see what it was like to witness that man speak. DeLaGhetto, he chooses a time and place that’s just a bit more… personal.

The dudes in Dude Perfect are back from London, and they’ve brought with them some ideas for new Olympic sports. Up first on the docket: worldwide paper airplane battles. Cory Cotton and the boys take to the roof of a city building to test their aerial skills, and holy moly—these guys are good.

It’s probably time to chill with the “Call Me Maybe” parodies when the young republicans of Chicago start getting in on the fun, right? Besides, no one on this song hits the hook with nearly enough gusto. The whole operation’s a little bit funnier when you realize that the video’s a sales pitch.