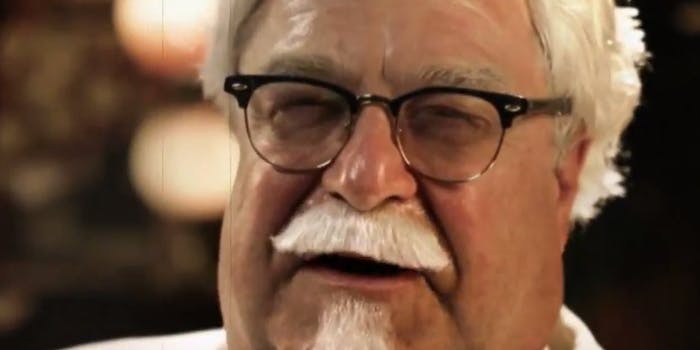 KFC's Colonel Sanders, played by John Goodman, reckons his restaurant is a bit more progressive than Chick-fil-A. Plus: the Star Wars Imperial March as played by a Maytag washer.

Nobody’s ever accused Colonel Sanders of being anything but a man of the old fashioned sort. “But when it comes to the subjemecation of marriage rights,” the ol’ Colonel reckons that he’s a bit more progressive than his pals over at Chick-fil-A. Comedy legend John Goodman stops by the Funny or Die studios to tell the world just how much KFC “loves the gays”—and listen to a little bit of Bette Midler in the process.

The Punk’d crew’s gone from TV to YouTube. In the premiere episode of Prank Lab, show host Sean Durrie and a professional stuntman answer a lady’s Craigslist ad by giving giving her white Ford Explorer a rather R-rated test drive, skidding out in reverse before plowing into a pile of crates.

3) The NOC, “What Makes You Beautiful—Gymnastics Parody”

The United States women have won gymnastics gold, and to celebrate, the Network of Champions is firing up the parody machine. This round, NOC remixes One Direction’s “What Makes You Beautiful” into “What Makes You Flexible,” a guitar-crutched ode to the seven medalists: “You hit the floor, get perfect scores, and you’re small enough to fit inside a dra-a-awer.”

For all the people who thought that the pinnacle of musical achievement was learning to play “Mary Had a Little Lamb” on your cell phone, this home alone husband has got a trick for you. Pressed to run a load of laundry, the unidentified man took the time to work out a take on “The Imperial March” on a Maytag.

The list of things you can do with a little plastic baby is long, hilarious, and oftentimes cruel. YouTube rascal Roman Atwood focuses his latest prank video on the latter two, freaking people out over the prospect of an abandoned baby before making it evident that they’re just dealing with a plastic doll.