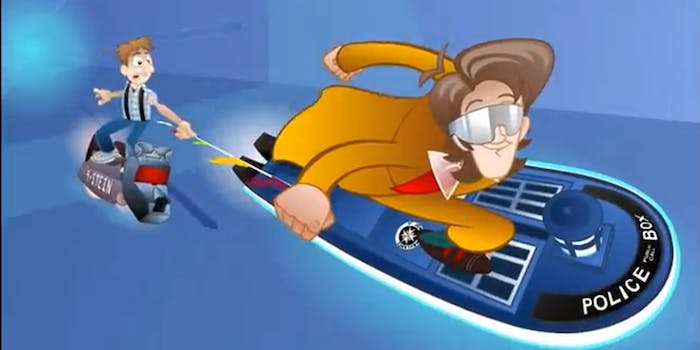 Doctor Who meets Back to the Future in a collision of time travel adventures.

What would the Doctor do if the TARDIS transformed into an ’80s-era DeLorean? Along with Amy and Rory, they travel to the future to save their kids with a plethora of Doctor Who and Back to the Future nods.

We may not always get the lyrics right on the first listen, but sometimes the results are better than the original words, as Pleated Jeans puts some of the most popular songs from 2012 in one video. Maybe just one more listen and we can shelve these songs for good.

If you’re already feeling nostalgic for 2012 (and have about 20 minutes to spare), Ryan Greene put together the ultimate video of the top 100 videos of the past year, full of amateur and professional videos alike.

Perhaps putting trust in a bunch of strangers isn’t the best idea. One person pulls the “trust fall” exercise on random people around town, but not many go out and catch him—or maybe they were just confused.

5) Paula Papen, “eBay booboo and a fistful of snot”

One mother decided to pull a prank (and have a laugh at the expense of her son) after he almost bought a $50,000 Mustang on eBay. He understandably freaks out before she tells him otherwise.