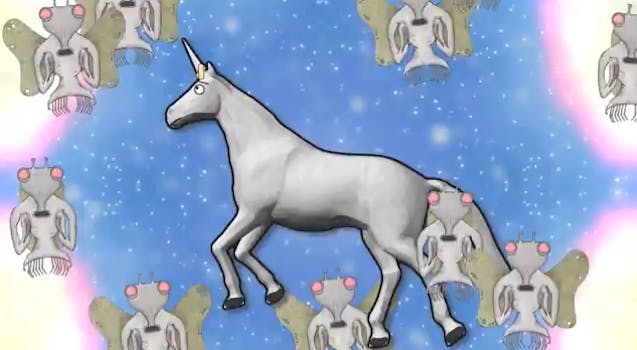 After nearly four years, Charlie the Unicorn and friends return to YouTube!

It’s been almost four years since the last Charlie the Unicorn video, but now Charlie and his friends have traveled to the moon to defeat a singing millipede and blow up the whole thing in their trippiest adventure yet.

Now that 2013 is just around the corner, it’s time to look towards the New Year, and Rhe De Ville sings of new beginnings as her date runs all over New York City to make it in time for the ball drop.

Vlogbrother Hank Green wrote an entire song about the Anglerfish, and now Ze Frank has even more “facts” for you on the Anglerfish—or rather, a rainbow of ugly. This master of disguise can also use different “clothing” to catch its prey, if you take Ze at his word.

What better way to sum up the past year of sports mishaps but in song? The NOC took one of the holiday season’s creepier songs and turned it into a duet about athletes who didn’t have such a great year.

They didn’t teach you this in college, but being a twenty-something is a serious condition in which people question everything and avoid the real world. But don’t worry, you’re not alone. The condition can last up to nine years, so see a doctor.