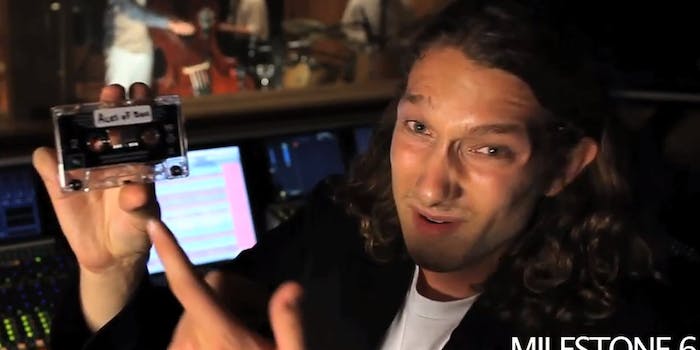 CDZA takes you on a musical journey through history, from Thomas Edison to T-Pain. Plus: Are Michael Jordan and Kobe Bryant secretly the same player?

Grab your headphones and tune in to the latest installment from the Collective Cadenza, in which the experimental musicians retrace the eight most important milestones in the field of recorded music. It starts with Edison. It ends with T-Pain. Somewhere in the middle: a take on the Temptations.

2) Dave and Ethan, “Using a Hype Man to Pick Up Ladies”

Some of the most successful rappers in the game have benefited from having hype men back up their raps on stage. Shouldn’t the same thing work for picking up girls? This weekend, Dave and Ethan gave that theory a shot.

Bodega Cat’s “Homo Thugs” series seems to have stalled a bit, but the comedy team of Kevin Barnett and Jermaine Fowler roll on. The Brooklyn-based duo’s latest details the foils and spoils of two of the dumbest criminals to ever cook up a crime.

There is a very serious Kobe Bryant fan out there who believes that the Los Angeles Laker guard deserves legitimate mention in the same breath as the great Michael Jordan. In fact, Youssef Hannoun is so convinced of their similarities that he’s gone ahead and made this 2:32 supercut of the two dynamic players making the same exact plays.

Another day, another song making fun of Rep. Todd Akin’s comments about “Legitimate Rape.” This round, it’s dragapella beautyshop quartet The Kinsey Sicks running through their parody of James Taylor’s “Carolina In My Mind.”