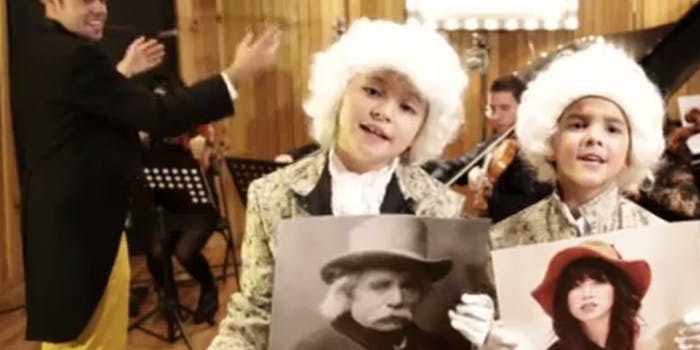 YouTube Guide: How to get kids into classical music

1) Collective Cadenza, “How to Get Kids Into Classical Music”

The foremost source on Internet Comment Etiquette is also quite the sketch comedian. In this routine from his comedy duo Let’s Go To Class, Erik confronts the woman he married because he thought that she was a man.

Think Felix Baumgartner’s free fall from space is impressive? Take a look at Peter Gilroy. The Joe Dirt descendent decided to eat a cart full of burritos before ascending into space in an effort to break the record for “the highest poop ever taken.” “And it just broke the smell barrier.”

Unlikely fictional presidential pundit Michael Che’s most recent campaign ad for Mitt Romney got pulled off YouTube, but the Above Average Network was able to bring it back. “We need a president that believes in the American dream of everybody having a vodka company,” Che says. “I want a president who’s not afraid of taking advantage of natural resources—in other people’s countries.”

What’s the worst thing that a child could possibly go through? How about a dad with no sense of humor. The New York-based Harvard Sailing Team troupe tackles the embarrassing issue surrounding unfunny dads and provides a blueprint for the best way to talk your dad right off the comedic ledge.