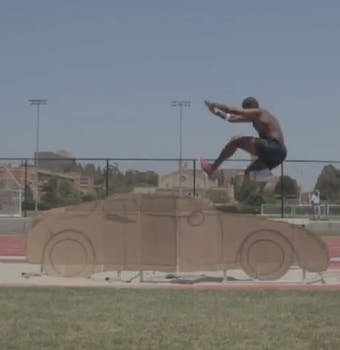 He’s better known for “Rapping Book Titles,” but DeStorm Power got his start—and his impeccable physique—through a series of workout tutorials on YouTube.

It’s hard to imagine today amongst the wealth of high-energy original raps and popular challenge tracks, but there was once a time when DeStorm Power‘s YouTube channel wasn’t filled with much music at all.

In fact, when the massively popular channel debuted in 2007, there was little to suggest that the artist had dreams of making it big as a rapper. Instead of razor-sharp tracks, there was a steady stream of high jumps and at-home workout routines.

Yet, those exercise videos did more than strengthen Power’s core. They helped establish his presence online and develop his voice as perhaps YouTube’s most-prominent black performer.

“That’s how I got my start and started getting subscribers coming to my channel,” Power told the Daily Dot. “As I started to get more in depth with learning to edit things, I started to incorporate some of my music. From there, I branched off and told people to check out the music. The biggest challenge was trying to find a niche that worked on YouTube that was different.”

That niche eventually came via a bi-weekly string of popular raps that’s cast Power as the premier lyricist on YouTube’s network—and with 1.2 million subscribers, he’s easily the most-popular independent musician on YouTube.

But his music would have likely fallen on deaf ears had he not creating such a following through fitness videos.

It’s no wonder that his most-popular video after the SEO-friendly “How To Approach A Woman” is “Abs Vol. 1—Extreme,” which to this day has racked up over 5.7 million views. In it, Power’s displays charisma, character, and a flare for the theatrics—all of the characteristics of a DVD-worthy workout instructor. In just under four minutes, he works through a series of original routines with names that could double as track titles (“Walk on Clouds,” “Rock the Boat,” and “My Seats Too Hot!”).

Power’s unique hybrid of fitness and rap is articulated perfectly through his “Extreme Pushups” run, a three-part series that finds the chiseled entertainer gradually working his own music into the fold.

Posted September 2007, volume one of the “Extreme PushUps” series shows Power doing pushups in the park while an instrumental of Terror Squad’s “Lean Back” bounces on repeat.

The video’s been seen over 500,000 times. By the time it reached a groundswell, Power knew he had an outlet for his music. He posted “Vol. 2” with his own “My Yard” serving as the soundtrack. Then he threw “Protest” on “Vol. 3–Expert Edition,” which posted a year later just as he was beginning to divert his YouTube channel towards music-centric clips.

Extreme pushups aren’t as much a part of Power’s YouTube routine these days. In fact, he hasn’t posted a fitness routine since 2009. But the versatility that his transition from fitness instructor to rapper demonstrated is still one of his hallmarks.

With more than 360 videos under his six-pack, he’s far more likely to entertain his 1.2 million subscribers with themed tracks about Instagram, Monopoly, and “Rapping Book Titles.”

But it’s safe to say Power hasn’t abandoned his workout regime. And you don’t even need to watch him long jump over a car—cardboard or otherwise—to know that.