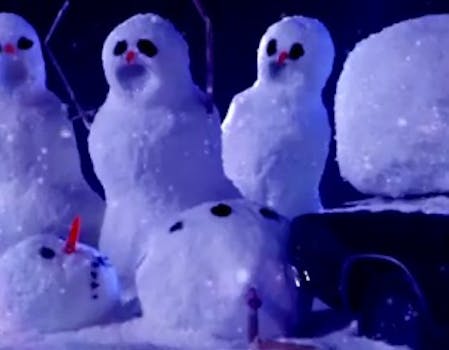 Had it up to here with Christmas cheer? Here are some of the Daily Dot’s favorite cures for holiday happiness: spooky, creepy, and dark videos that cut right through the treacle.

“A Krampus Carol” by chef and TV personality Anthony Bourdain is an animation about Santa’s bad cop from Central Europe. Krampus looks like a hideous beast or demon, and punishes naughty children. If they’ve been superbad, he throws them in his dirty sack and drags them off to be eaten later.

Jimmy Kimmel learned nothing from his Halloween challenge: His Christmas-themed YouTube  challenge is another experiment in making children cry. Kimmel asked parents to give their children a bad gift, like a half-eaten sandwich. Fact: Tormented children are hilarious.

Peter Chao, that fiery Asian guy on YouTube who wants you to “stop drinking the haterade, and start drinking the bubble tea,” teamed up with friends Gentleman’s Vibe and IFHT to bring the YouTube community “F*ck Christmas!”

The song focuses on the holiday’s pain-bringing tendencies. A particular source of rage: Getting lied to about Santa Claus’s existence.

Oh, sure, these Christmas hedgehogs look supercute in this interactive video series, but when you try to get them to sing, unexpected things happen.

No. 1 YouTube personality Ray William Johnson also got into the negative holiday spirit with his “SANTA HATES POOR KIDS” song. The animated video and song touches on the commercialization of Christmas with lyrics like “Santa must hate the poor kids, ‘cause Santa only hangs with the rich,”  and “if you ain’t got money then he ain’t coming.”

“A Very Calvin & Hobbes Christmas” spends one minute and 19 seconds panning over the “classic snowman torment scenarios” from the comics series, with “Winter Wonderland” for musical accompaniment.

Cyriak, that UK animation artist with a knack for making his disturbing videos go viral, made a creepy thing for this holiday season. “Festive greetings from Cyriak” is even more nightmare-inducing than his usual work.