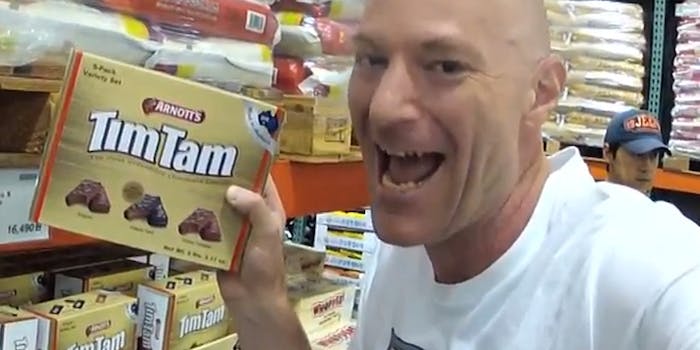 Steve Miller's latest video, "Rebuilding Namdaemun," does not contant a sample of the Rubettes' "Sugar Baby Love." But YouTube thinks it does.

In the tricky world of YouTube copyrighting, creators can pay a hefty price even after taking the time to make sure they do everything right. Ironically and unfortunately, the culprit is all too often YouTube’s sticky Content ID system, an automated copyright management platform that’s designed to give rights holders the utmost control of their content.

That’s no more true than in the case of Steve Miller, an American living in South Korea who runs The QiRanger Adventures, a travel vlog with more than 11,000 subscribers.

Miller, a YouTube partner since he launched his channel in 2008, is no stranger to YouTube’s Content ID system and corresponding copyright rules. He’s dealt with them them before, and he takes efforts to respect them, making sure to purchase licensing rights to every song he uses in his videos.

But Miller still ran into trouble when he posted a video titled “Rebuilding Namdaemun” to his YouTube channel Monday afternoon. Only a few hours after going up, he learned that his video had been flagged. YouTube’s Content ID system had determined that he was using a song that belonged to someone else.

“This is the fifth time I’ve had to deal with Content ID,” Miller told the Daily Dot. “But it’s the first time it’s ever been this jacked up.”

By “jacked up,” he means it’s the first time the system has been so obviously flawed. The first four times involved issues surrounding the Content ID’s inability to recognize multiple license holders for a particular song, which meant that one of Miller’s tracks could have been flagged if the system already associated it with another individual. It was an issue he was always able to resolve with a simple phone call.

“In this instance, the songs I used, classical orchestral pieces which I had the commercial licenses for, were matched by Content ID to this weird disco tune from 1974.”

That weird disco tune from 1974 is a song by the Rubettes called “Sugar Baby Love.” And it’s cheesy!

“Sugar Baby Love” sounds nothing like the two songs that Miller chose for “Rebuilding Namdaemun.” Those two are slow-building, emotive, and epic. They are classical and ethereal tracks. They are most definitely not disco.

“Now I’m at a point where I’m putting out some requests to some friends who have contacts with Google and YouTube in Korea and the States to see what can be done to resolve this. Neither EMI nor Warner/Chappell has a stake in it, so there’s a long process before it filters through and gets dismissed.”

Miller thinks YouTube should not be the entity directly responsible for resolving the dispute. What they need to do, he said, is create an engine that actually works.

“In the cases in which you have multiple entities having commercial licenses, they need to make sure the content ID engine reflects that ability,” he said. “Currently, it doesn’t.

“The individual using the songs should be able to work out who has the right copyright ability. YouTube needs to make sure that those licenses are fully represented. In cases like this, I think YouTube has a certain due diligence to review each case when a song is flagged before taking steps to demonetize. It’s a frustration surrounding the fact that you do everything you can to abide by the Terms of Service, and then Google doesn’t seem to be very quick to resolve the issues.”

YouTube’s struggle with its Content ID is longstanding. In June, animation filmmaker M dot Strange had his film, Heart String Marionette, wrongly flagged for a copyright notice over the sound of wind.

Google has actually made one change to expedite process: Now, when users dispute a YouTube claim, they get an email confirming they dispute. Users also receive a notice saying how long they’ll be waiting for a response from those holding the rights to a song.

Miller said he submitted his claim over the weekend. His response date was listed as Oct. 22.

“That’s a crock,” he said. “Google removes any monetization abilities as soon as somebody flags a video, and then the other parties have a month to get back to you.”

That means that Miller’s ability to run ads on “Rebuilding Namdaemun” stays in limbo for the next four weeks.

“It’s more of a frustration than anything,” he said. “The first time, I was in a worse spot. Having no experience with it, I had no clue how to navigate anything.

“Now, being a partner for so long, you understand what you’re supposed to do. Trying to go through the back doors and having no access to partner support… five or six years ago, you did have those people that you could contact. You had representatives that you could email and address disputes with.”