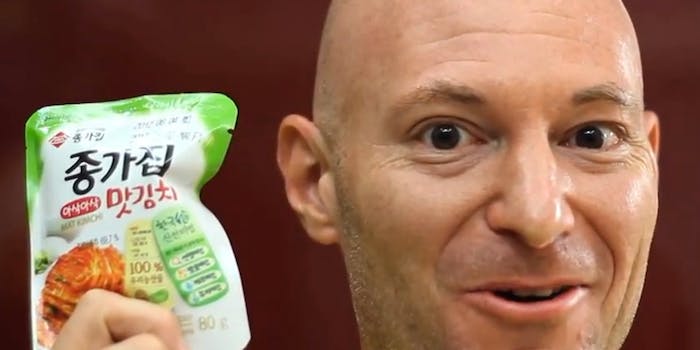 Steve Miller has been fighting over the rights to a song he didn't even use, and he was doing it with two labels that had no hand in its licensing.

YouTuber Steve Miller has lost an appeal for a Content ID-flagging error that any discerning human being would say he should have won.

As the Daily Dot previously reported, Miller is the affable and animated host of QiRanger Adventures, a semi-popular travel blog whose videos generally receive between 400 and 10,000 views. They’re experiential documentations, taking in everything from Portland’s Japanese Garden to an Alaskan Zipline.

On Sept. 24, Miller released “Rebuilding Namdaemun,” a story that detailed the restoration of one of Seoul, South Korea’s historic Eight Gates. It’s a two-minute video, and in it, he used two different songs for the soundtrack: a royalty free Yuri Sazonoff track called “Requiem For Your Soul” and a Josquin des Pres’s “Start Anew,” which is also royalty free.

Miller purchased the copyright licensing for each track before inserting them onto his vlog. He claims he’s an adamant follower of the rules surrounding YouTube’s Content ID system—the automated copyright management platform designed to give rights holders control of their content—and goes to great lengths to respect the site’s corresponding copyright rules.

But Miller ran into trouble when he posted the video onto his YouTube channel. A few hours after publishing, he received an email notifying him that the video had been flagged. YouTube’s Content ID system had ruled that he was using a song that belonged to someone else.

The song in question was a 1974 disco hit by the Rubettes called “Sugar Baby Love.” We’ve listened: It sounds nothing like “Requiem For Your Soul” or “Start Anew.” Still, YouTube told him that he was using a song that belonged to somebody else: two record labels, Warner/Chappell Music and EMI Music, and “one or more music publishing rights collecting societies.”

This was nothing new to Miller—he’s been similarly flagged five times since 2008—but the sonic disparity was discouraging.

Simply put, he was not using the Rubettes’ song or anything that even sounded like it. He filed an appeal—a 1,000-word writeup YouTube allows after its pull-first, ask-questions-later flaggings.

His ruling came back Monday; a “canned response” told him that he had been denied.

He was fighting over the rights to a song he didn’t even use, and he was doing it with two labels that had no hand in its licensing.

Spurned by the labels, he turned his attention back to YouTube. He sent an email to the site’s copyright department asking that it remove the false positive match, but the email seemed to fall on deaf ears. All he received in return was “a canned YouTube response sending me to the Web page outlining the [appeals] process.”

Miller obtained contact information for someone in the YouTube copyright department and sent a personal letter explaining the situation to the individual, whose name Miller redacted from the following note.

Miller has yet to receive a response, and he doesn’t figure he will. YouTube has also yet to respond to the Daily Dot’s request for comment on the issue. For now, the video remains on site, but Miller’s been blocked from running ads on its frames.

“It’s frustrating,” he said. “You go through the extra steps. You take the precaution to adhere to the terms of service and respect copyright, and to have a system so flawed violate your own copyright is really frustrating.”

For what it’s worth, Miller will note that the ad block won’t prevent him from earning a living.

“These videos have provided me opportunities in television and radio, and that’s where I make my extra income,” he said.

But for YouTubers who make their money running ads, it forecasts a cloudy future.

“Anyone who relies completely on YouTube ad revenue to make their living would be greatly impacted by this,” he said. “A few of my friends are those A-list YouTubers. This is their revenue stream. When a video gets flagged, it cuts into their income source and is a huge issue.”

That’s a huge issue for partners, the ones YouTube has heavily relied upon in the past. But for the site and its employees, it’s barely a glitch. After all, there’s an automated system in place to handle situations like these.