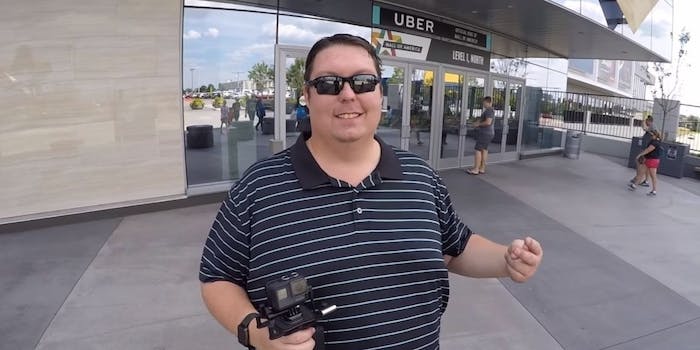 Police reportedly have been following him for months.

The man who runs a car channel on YouTube has been charged with more than a dozen counts of street racing after a four-month police investigation.

Paul Powell, whose FamilyCruisin channel on YouTube has more than 64,000 subscribers, was arrested by Plainfield, Illinois police last week and charged with 15 misdemeanor counts of street racing and one count of child endangerment. On his channel’s description, Powell said he was “in the process of building the fastest Hellcat on YouTube.”

Yet, his need for speed on social media led police to reportedly investigate him and several others for the past four months. According to the Chicago Tribune, police first took an interest in Powell when they discovered one of his YouTube videos showing a car in flames. Though all of Powell’s videos have been deleted off his channel, apparently on the advice of his attorney, his vlogs reportedly consisted of him showing off and driving his vehicles—including some cases where he was filmed allegedly burning out and driving his Dodge Challenger Hellcat—and pretending to be an Uber driver.

Plainfield Police Chief John Konopek said there were more than a dozen videos showing Powell speeding and driving recklessly on city streets. Six other men have also been charged with street racing, including a registered sex offender.

“It would be a stretch to say that he’s a menace to the highways,” Powell’s father, also named Paul Powell, told the Tribune. “It’s not like he was doing 100 mph on Route 59 … He didn’t speed in subdivisions, side roads or in populated areas. He just didn’t.”

The younger Paul Powell is married with four children, and he wrote on his channel that his purpose was to “make car videos for YouTube that I hope people find interesting.”

A GoFundMe account has been opened by Powell’s mother and she wrote that her son was held on a $400,000 bond (though it was apparently later reduced to $150,000).

“This man has never even been arrested, does not drink, smoke or do drugs,” Tammy Powell wrote. “He paid for his wife to get her degree before he got his degree, and he is on the security team at his church. He needs the help of everyone who can help to survive this.”

In four days, more than $3,500 has been raised by 87 people. The goal of the GoFundMe is $75,000. In an update, Tammy Powell wrote that her son also had lost his job. She wrote, “With all the bad publicity out there, and most of it is wrong, it is probably going to be difficult for him to get another job. This just keeps getting worse.”