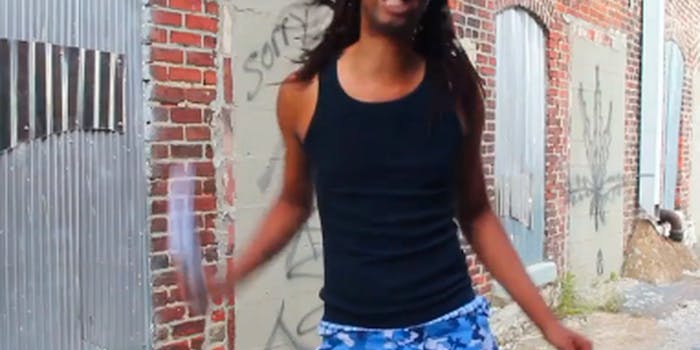 Hide ya kids: PBS takes a close look at mash-ups while Beauty and the Beast gets remixed by Todrick Hall.

1) Todrick Hall, “Beauty and the BEAT”

Belle’s back, and she’s found herself in quite a precarious position. Rather than lounging in a castle as the lavish wife of Beast, the Beauty and the Beast protagonist finds herself in a neighborhood that looks much more like Watts, Los Angeles, than anything Walt Disney could conceive. Oh, and Antoine Dodson drops in to do some shouting! Hide ya kids, Belle.

2) PBS Idea Channel, “Are Mashups the End of Music Genres as We Know Them?”

Having previously tackled Reddit, bronies, and Mister Rogers, PBS host Mike Rugnetta muses on what exactly makes a musical genre before settling on the fact that they exist solely for the music industry (or what’s left of it) to target its sales efforts. But now rapper Lil’ Jon is showing up on a track with kid popper Stephanie from LazyTown and nobody knows who to market that towards. It all goes to show that genres can be arbitrary and limiting, which is what those on the inside of the industry have been saying since the ’70s.

These are bold, bright days for the mobile drawing app Draw Something. The game, made by Zynga, recently witnessed its 35 millionth download, will hit TVs with a CBS game show in early 2013, and just recently made it onto John Mayer’s radar. Thanks to illustrator Jimmy Thompson and editor Ed Cardenas, Draw Something is now prominently featured in a music video for Mayer’s “Queen of California.” It’s pretty wild; even Mayer agrees. He posted the video to his Tumblr page this morning. “A must see,” he wrote. “So great.”

What if you were forced to do a girls night with your boss? That’s the problem facing Abby’s assistant Abye, who was told she’d get fired if she didn’t join her boss for dinner and drinks. It’s a disaster for Abye from the start, but things start to get really out of hand when Abby decides to play Edward Fortyhands.

Look, I don’t have much of an interest in watching Magic Mike myself, but I do have a vested interest in knowing what Grace Helbig of My Damn Channel’s Daily Grace has to say about Magic Mike. The daily vlogger’s as scatterbrained and chatty as usual, bringing her sarcastic, potentially hungover wit to the much-discussed film. “Guys, this movie is like the perfect polka deck,” Grace exclaims. “We have caught them all. We have Channing Tatum. We have his backwards hat. We have his dick. We have Olivia Munn sitting there wearing tank tops… The rest is just gravy.”