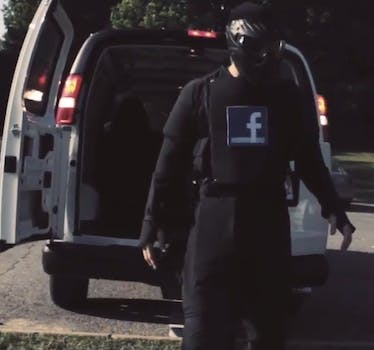 Andrew McMurry introduces the Facebook police, a new unit of justice that's determined to bring an end to all that mindless posting and prodding.

Got a friend who posts nothing but tedious commentary about his or her daily activities to Facebook all day? Budding YouTube star Andrew McMurry has just the plan. Introducing the Facebook police, a new unit of justice that’s determined to bring an end to all that mindless Facebook posting and prodding.

Instagram is quickly becoming the one-stop shop for every vintage-filter shot of your friend’s breakfast, cocktail, or toenails. Instagram’s greatest ability, however, remains making yourself look better and appear more popular than a standard camera ever should. That’s the primary reason why DeStorm has joined the fold, at least. The YouTube rapper pays homage to the community’s star-making powers in his hot new music video—one certainly not bereft of goofy Instagram shots.

1993 seems like such a long time ago, but if you can remember anything from those days, it’s likely that the memories are filled with a hoard of lip synch-ready songs by Ace of Bass. The Swedish quartet invaded the United States 19 years ago, leaving a legacy that apparently lives on to this day. Here, five upright bassists from New York City collective CDZA rip through a medley of AOB hits, including “All That She Wants,” “It’s a Wonderful Life,” and timeless classic “The Sign.”

We’ve already seen President Barack Obama jive on LMFAO, Lady Gaga, and Carly Rae Jespen. The most logical next step: tackling Justin Bieber. In the new cut-up from dub video extraordinaire BarackDubs, the president makes his way through Bieber’s “Boyfriend.” Who knew that he was so prone to saying “swag?”

Summer, yes! Let us make non-filling tacos stuffed with seafood so as not to bear ourselves down with meat! YouTube chef Hilah Johnson feels us, and in this week’s episode, she shows us what it takes to make the most delectable set of fresh shrimp tacos. Fry ’em on the pan, then add jalapeños, orange juice, green onions, and a little splash of tequila for the perfect summer dish.