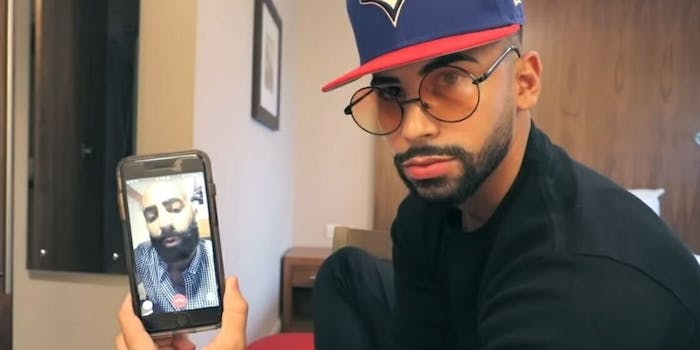 'Gonna let you taste your own medicine, I promise you that.'

Mega-popular YouTuber FouseyTube has disappeared from the spotlight. Maybe that’s because in the past few days, his former friend Adam Saleh has blasted him on social media and claimed he’s a “garbage human being.”

FouseyTube, whose real name is Yousef Erakat, announced last month that he was giving away his YouTube channel (more than 10 million subscribers) after a tumultuous summer. In July, a show he was putting on in Los Angeles was canceled by a bomb threat that Erakat believed was caused by another YouTuber’s fans swatting the event. Last month, he posted a video saying goodbye to his fans in which he sat on a mountaintop and said he had fantasized about suicide.

A few days later, the vlogging prankster/gamer said he would allow lower-profile YouTubers to use his channel to post their own works for his vast amount of fans.

Last week, Saleh—a well-known prankster who has created hoaxes on his own channel, which has nearly 4.5 million subscribers—tweeted an apparent warning to Erakat, writing “I’m not gonna be nice anymore. People take advantage. It’s coming … I need to stop feeling bad for people. Especially when they’re in the wrong. Fousey would’ve been made 10 videos on me if I did what he did to me. It’s coming bitch … Gonna let you taste your own medicine, I promise you that.”

Sorry yall if Im being too mad!!! I've had enough of being stepped on and manipulated from this dude!! I know there's a lot of questions being asked and Ima answer all of em real soooooooon!! Hold tight.

In the past few days, Saleh has uploaded three videos about FouseyTube (and apparently there’s one more coming), claiming Erakat has treated him badly, manipulated him and his friends, and said he put Saleh’s life at risk.

Saleh talked about going on tour with Erakat and said that he made false promises to an audience member who has cancer while in Australia. Saleh also said that Erakat wanted to basically use him as a human shield in case somebody attacked Erakat.

He also said Erakat threatened to sue him after the two began having problems.

“If you ever treat me the way you treat your boys, I punch you straight in the mouth,” Saleh said. “The way you treat them is horrendous, it’s pitiful, it’s disgusting. I don’t know how another human being can treat someone that way and actually call them their friend.”

In another video, Saleh also interviewed one of Erakat’s friends to see how he treats those closest to him.

Though Erakat apparently is out the country and staying away from social media, Saleh said Erakat is keeping tabs on him from New Jersey. And Saleh apparently wants a response.

So far, Erakat has remained silent.