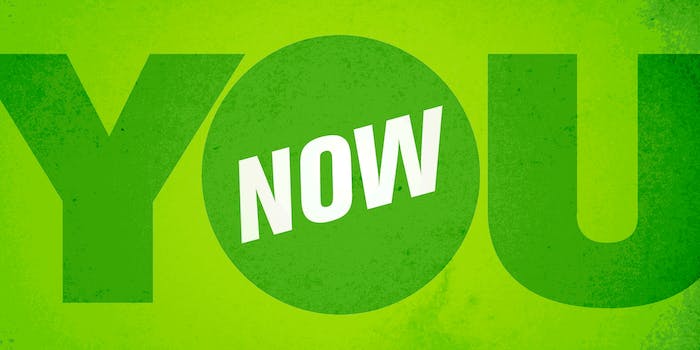 It's makes the fleeting livestreaming universe a little more permanent.

Livestreaming may be all the rage in the world of digital video, but distilling those live videos into the most digestible bits has been a challenge—until now.

YouNow, the livestreaming community that’s built its own stable of social media stars, introduced Moments to its platform this week. It allows users to capture and share the best clips of their favorite streams. Instead of relying on people to go back and catch up after they’ve missed a stream by watching the whole thing (a function available on most livestream platforms), they can just watch the best Moments as judged by the community that was there.

Editing and clipping video is one aspect of the digital video world that remains a frustration to inexperienced users, so YouNow’s Moments feature is simple. Users tap the screen when they find a section interesting, hold for up to 15 seconds, and they have a Moment. Clips feel like short Instagram or Vine video loops, but stay native to the YouNow platform.

The sharing capabilities extend beyond the YouNow platform, and with Moments filtering onto wider services like Facebook or Tumblr, the function will also serve as a way to bring new eyeballs to YouNow stars. It also helps to build up the profile pages of fans who are using the service just to watch their favorites, not livestream themselves. Instead of a plethora of empty profiles, now those users will have a catalog of their favorite moments, which will define their identities and help them make connections with other fans.

“Moments is transformative for YouNow,” wrote YouNow Founder and CEO Adi Sideman. “For the first time, users can share their favorite broadcasts with the world.  Moments make broadcasters more discoverable and fans can now play a bigger role in promoting their favorite creators. Moments also makes YouNow more participatory, as all users can become content creators and distributors.”

Users have reacted positively to the new feature.

And creators have encouraged their fans to capture and share the best moments from streams.

love seeing all these moments from my broadcasts! make sure to capture some amazing @YouNow moments today when I'm live 👌🏻👌🏻👌🏻

With YouNow broadcasters going live daily or even multiple times in the same day, the ability to cut through the clutter for those playing catch up with the Moments feature is huge. With other livestreaming platforms and programs just getting their footing in the space, many will surely follow suit with similar versions to help broaden the reach and impact of livestreaming.

But for now, YouNow owns the Moment.