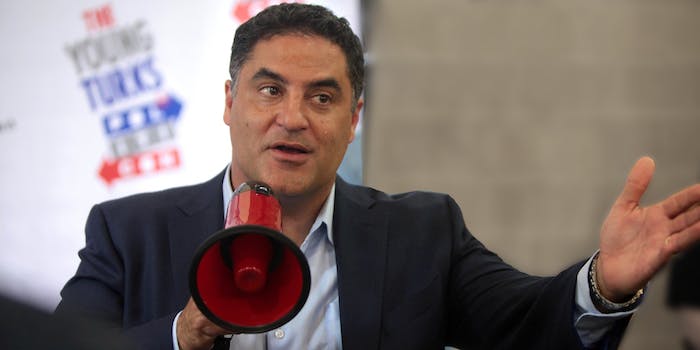 For the Young Turks, a time to prepare for President Trump

When the New York Times announced Donald Trump’s lead on election night, the Young Turks’ founder Cenk Uygur told his 3.1 million viewers to “brace for impact.” The new president-elect didn’t surprise Uygur, who warned voters last summer while appearing on ABC News that this result was coming, but it sure ignited his passion to fight back.

“This is not a normal politician and not a normal election,” Uygur tells the Daily Dot. “Trump is a wild card that could do things we’ve never seen before. When it comes to American ideals and principles that we love and cherish, and the Constitution, he just doesn’t respect them. He looks at the First Amendment as optional.”

The Young Turks have been challenging politics and traditional news coverage on YouTube since 2005. In the years since, it’s grown a network of blunt, diverse commentary with 11 different shows covering everything from sports and pop culture, to breaking news. It continues to set record after record, acquiring over 3.2 billion views on its breaking news channel, making it one of the most viewed indie news networks.

Trump’s election has left many Americans questioning their safety under an imminent administration that threatens the defunding of the Affordable Care Act, Planned Parenthood, and teases a registry for Muslims. This fear has been shared with popular YouTube stars like Kyle Krieger, Kat Blaque, and Joey Graceffa: For YouTube’s creative class, it’s a period of uncertainty manifested via confessional videos.

But Uygur plays the role of fuming, left-leaning freedom fighter on the platform. On the day of the election, his livestream gained over 1 million hours of watch time as viewers clung to the channel for guidance.

“What I’m worried about is two years from now he will be deeply unpopular because he’ll have done the corruption that he campaigned against. He will make a series of horrible blunders,” Uygur maintains. “And then he’s going to need a scapegoat and that’s when it gets really dangerous.”

Now more than ever, the Young Turks are being looked upon for guidance in navigating the next four years. Uygur says it comes down to two things: Getting money out of politics, and keeping journalism honest.

“We call ourselves ‘Rebel Headquarters’ and we’re going to fight against the Democratic Party establishment first because they lost to a guy who was the most unpopular candidate in American history,” Uygur says. “The most important thing is activism. We didn’t just get civil rights legislation because of politicians, we got it mainly because of Martin Luther King—who was never elected to office. We’re going to protest in the streets and fight to get the money out of politics, I think that’s the most important thing.”

What sets the Young Turks apart as a news organization is the deep trust it’s built with its audience. It’s why the channel crowdfunded more than $500,000 last month from fans to hire four reporters, including Black Lives Matter activist Shaun King.

In the weeks leading up to the election, the Young Turks broke the story of political analyst Donna Brazile leaking questions to Hillary Clinton’s campaign prior to the Democratic National Convention. While Brazile told SiriusXM radio that as an activist she did not regret her decision one bit, it did lead to CNN drop the political analyst from its roster.

“Traditional media is a death watch,” Uygur says. “Their lack of authenticity, and their craven disregard for the truth in order to get access to politicians is going to do them in. What the Young Turks does, we’re real. We care about the news. We’re not just a bunch of posers and we have some fight in us. In the new world, we actually get people to care about their news and care about their government and get involved. That’s the answer.”

Where do we go from here? As Uygur says, in the moments when we lack hope, it’s best to remember that every generation of Americans has amended the Constitution in order to continue serving the American people. It’s a time to stay informed—a mission that can be assisted by channels such as the Vlogbrothers, Seeker Stories, and yes, the Young Turks. But most importantly, Uygur maintains, it’s time to stand up, organize, write, yell, and rally against injustice.