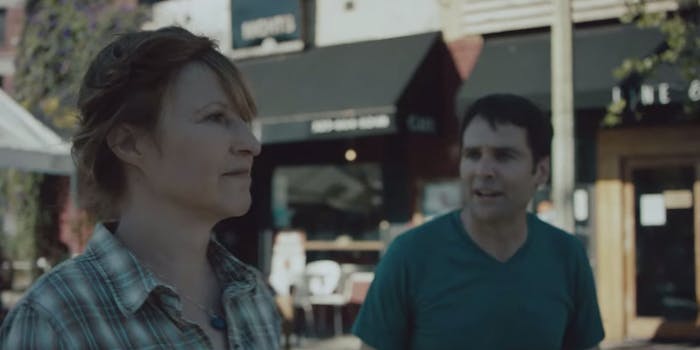 Thanks to Kathryn Schulz’s piece about the Cascadia subduction zone in the New Yorker, everyone’s freaking out about the impending apocalypse, as the ground shakes and tsunamis swallow considerable portions of the West Coast.

But New Jersey alt-rockers Yo La Tengo see the end of days a little differently.

As devastation descends upon Hoboken, New Jersey, drummer and vocalist Georgia Hubley strolls through town singing the Cure’s 1990s love anthem, “Friday I’m In Love.” Seemingly unaware of the exploding bodies and extraterrestrial hearts, it becomes clear that Hubley is the cause of it all.

Never has the end of the world been so pleasant.

The video, directed by Jason Woliner (Human Giant, Eagleheart, Nathan For You), is the first from Yo La Tengo’s upcoming album, Stuff Like That There—an apparent sequel to their 1990 record, Fakebook. The band mixes covers, reworkings of original classics, and a few brand new tracks.

Stuff Like That There comes out Aug. 28. A bit of a long wait, so make sure you stock up on delicious batteries.