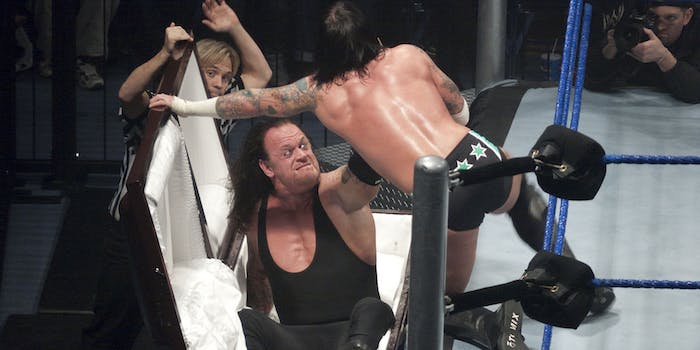 WWE mole has public breakdown after the Undertaker loses

The great WWE streak is over.

Reddit user Dolphins1925, who became famous for accurately predicting the winner of eight WWE matches in July, had his streak snapped after his source within the WWE failed to provide the right intel.

Dolphins1925 expressed his outrage on Twitter, freaking out over the sight of Brock Lesnar breaking the Undertaker’s 21-match winning streak.

Evidently my source has been feeding me outright bullshit on the biggest stage. No words for this.

I contacted my source but have received no response. As far as I’m concerned he’s a fucking fraud. I will get to the bottom of this.

For what it’s worth, my source gave me John Cena. But I have no faith in this asshole, win or lose. He has A LOT of explaining to do.

Still no word from my source. Flat out despicable behavior. Obviously, I was told Undertaker would win and extend his WM streak to 22-0.

In July, Dolphins1925 made headlines after he picked the winners of WWE’s Elimination Chamber pay-per-view event. Before the match, Dolphins1925 wrote on Reddit how he got his “information from a source who has VERY credible inside information regarding the outcomes (win/losses) of the matches themselves.”

Given that this information is out there, we both feel that I should continue to share this information until it garners the attention of WWE. Vince and upper management are not taking reasonable measures to prevent this information from being leaked. These people whom are leaking this information are profiting off it at the expense of the WWE, the fans, and the integrity of the product. It is for these reasons that I am hoping to put an end to WWE insiders leaking PPV outcomes.

While Dolphins1925 may not have picked the right winner, the online sportsbook Bovada knew the 49-year-old Undertaker would get beat.