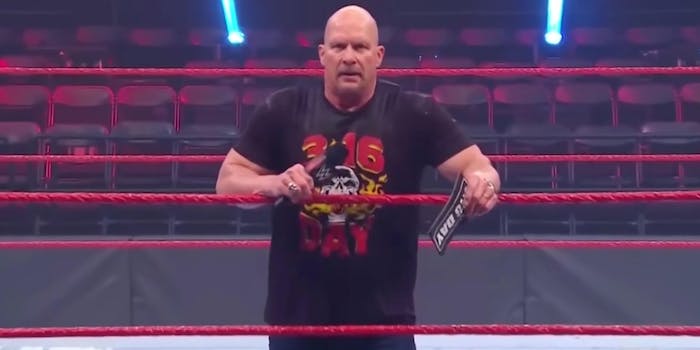 Will an empty ‘WrestleMania’ be the most surreal live-stream of all time?

World Wrestling Entertainment (WWE) released a statement late Monday detailing its decision to cancel the WrestleMania 36 event occurring on April 5 in Tampa, Florida, due to concerns regarding the coronavirus. The show is still happening, but like other recent WWE events, sans a live audience.

It’s weird, vaguely threatening, and it has already become a meme.

“In coordination with local partners and government officials, WrestleMania and all related events in Tampa Bay will not take place. However, WrestleMania will still stream live on Sunday, April 5 at 7 pm ET on WWE Network and be available on pay-per-view. Only essential personnel will be on the closed set at WWE’s training facility in Orlando, Florida to produce WrestleMania.”

In lieu of a live event with an audience, WrestleMania 36 will still happen in some capacity. The annual Super Bowl of wrestling will take place at the WWE Performance Center in Orlando with only the performers and essential personnel in attendance.

All promotions that fall under the WWE umbrella, such as Raw and Smackdown, have already been moved to the Performance Center due to state regulations. A fellow staple in American live television, SNL, recently halted production for three weeks to lessen the likelihood of coronavirus transmission. The WWE has taken an entirely different approach.

The results of WWE filming its recent shows sans audience are somewhat eerie and entirely hilarious. The veneer of reality seems to obscure itself even more in wrestling as performers embody their characters to an audience of empty chairs.

Clips from this extremely odd set of circumstances have gone viral on Twitter as memes. From the Undertaker hurriedly making his way to the ring to avoid an awkward, silent slow walk, to Bray “the Fiend” Wyatt warning John Cena of an impending “slaughter” without the cheers of a crowd to disarm this seemingly very real threat; it’s all gold.

Given the fact that WrestleMania 36 will also have no audience, it seems that the weird, surreal nature of these clips will surely be extended to the biggest wrestling event of the year. Some fans are mourning the cancelation of the original event and claiming that it simply won’t be the same without the spectacle of a live crowd.

However, others are fully on board with the absurd nature that WWE’s shows have adopted during this odd time—and are willing to fully lean into it for WrestleMania 36.

May God have mercy on us all.