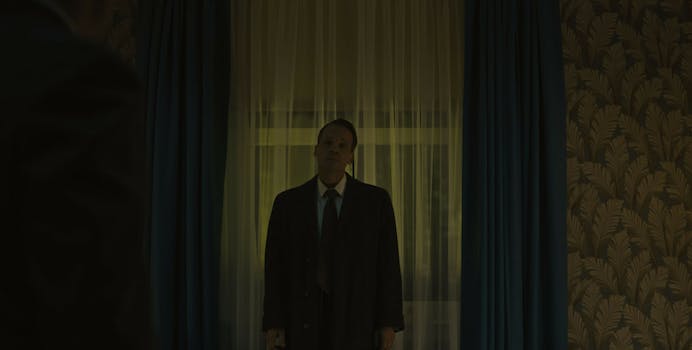 Frank Olson, a nonmilitary scientist working at a United States Army research lab, perished following a supposed fall from a Manhattan hotel. His death was preceded by Olson unknowingly participating in an LSD experiment, as part of an infamous government program called MK Ultra.

For the majority of the film, Morris (The Thin Blue Line) interviews the extremely bright Eric Olson, Frank’s son, who has virtually upended his personal life in his unquenched quest for the ultimate truth he deserves. Eric is a sort of Hamlet figure—the series takes its name from a line in the Shakespeare classic about a prince obsessed with the death of his father—for which Morris intersperses scenes from the famous Laurence Olivier feature version to highlight the consequences of Frank’s death.

Actor Peter Sarsgaard posts what should be an award-winning performance, re-enacting the events as Frank Olson. He, Molly Parker, and Bob Balaban turn in pitch-perfect performances full of depth and purpose.

Details of Olson’s unusual demise, at first called an accidental death were highly classified until 1975 when after beginning to look into the incident, the Olsons belatedly received an explanation—and an official acknowledgment and apology. Olson’s widow and three children were given a financial settlement and spoke with then-President Gerald Ford, who offered his condolences. At this point the story had altered, this time publicly: Frank committed suicide after an adverse reaction to the LSD-spiked drink given to him before his death.

Coursing and crisscrossing between the tragic events of 1953 and the official release in 1975, Morris takes the viewer into Eric’s mind and through the re-enactment of the days leading up to his father’s death. He paints a striking ’50s illustration. It’s Morris’ personal take on noir, with increasing mounds of fact, secret meetings, interviews in dimly lit rooms with past players, and true-life contradiction as drama.

Central Intelligence Agency operatives who were willing to be interviewed on film by Morris are featured, and investigative journalist Seymour Hersh ends up in the movie as a confounding lynchpin. It becomes difficult to know if Hersh is a contextual friend, foe, or frenemy to Eric.

In the end, Eric’s ability to rationalize and continually pay the emotional tax required, for decades now, is impressive and saddening. He is a Ph.D. from Harvard, and it has evidently taken all of his intellectual brawn to process this gnarled entanglement of fact and fiction.

With Wormwood, Morris turns in a spectacular, sensory experience in documenting what is at the core a story of a man desperately looking for his father.