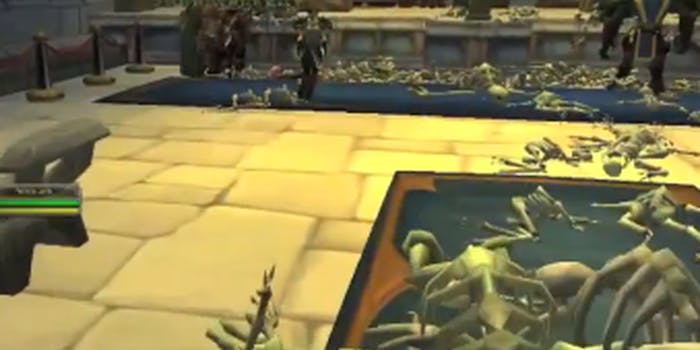 A hacker killed off two entire virtual cities, sparking an online battle between good and evil that will continue ad infinitum.

The World of Warcraft (WoW) universe reverberated with thousands of death groans Sunday after a hacker exploited a weakness and killed off two entire virtual cities. It was a hackpocalypse, a virtual armageddon. It was the end of the world—until everyone was reborn.

The troubles began around 2:30pm Sunday, when the entire Orcish city of Orgimmar got wiped out by a mystery evildoer. Once peaceful virtual streets became digital graveyards, lined with hundreds of skeletons.

As WoW forum member Kinzoku explained: “Orgrimmar got nuked, killing almost everything except for a few NPCs, all players and most of the NPC civilization.” (An NPC is a non-player—or computer-controlled—character. In other words, even the games innocent automatons weren’t spared.)

The culprit was a hacker who’d taken on the guise of a level 1 priest, flying about the cities with some kind of literal kill switch. You can see the hacker in action in the video below, which is NSFW, I guess, if only for all the death groans. (WoW characters don’t bleed when murdered, but they do exhale loudly.) PC Magazine’s Mark Hachman has also helpfully collected the days events in a slideshow of horrors.

“It was really weird,” wrote forum user Rhau. “I was [away from the keyboard] for like one minute, and when I came back I was dead and so were everyone else, including NPCs and such. Really creepy. I wonder what happened.”

Soon enough the hacker scourge hit the city of Stormwind, which the WoWWiki describes as the “jewel of the Alliance in Azeroth.” He or she also spread the carnage to other servers, according to the WoW insider blog.

In an official announcement posted shortly after the troubles began, Blizzard, the company behind WoW, was cagey about who was responsible and how he or she did it. Blizzard was quick to announce a fix, however, “so [the hack] should not be repeatable,” company representative Nethaera wrote at the WoW forums. “It’s safe to continue playing and adventuring in major cities and elsewhere in Azeroth.”

As if anyone can ever feel safe again. As forum user Lingmai explained, the massacre may have ended Sunday, but the battle between good and evil will continue ad infinitum.

“For some people their only joy is ruining the fun for others. They serve the darkness not the light. They are apparently not able to feel joy for a fun game, or the wonderful joy that comes from helping others. Instead they must destroy all that gives joy to others. While this is sad and [pitiable], they do and will continue to exist.”