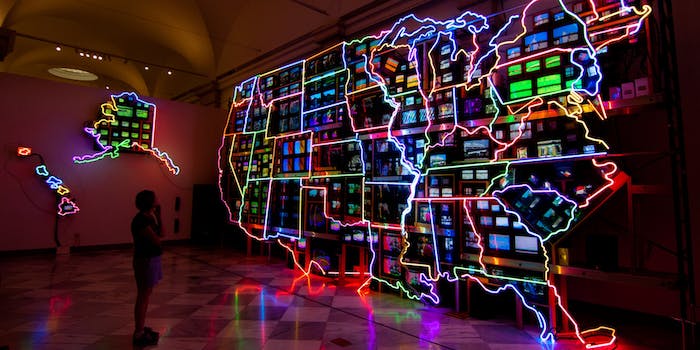 If you weren't already geared up for USA-Belgium, you will be soon.

In the second round of World Cup action, the United States will be taking on Belgium this very afternoon. Couple this very intense matchup with the fact that this coming weekend marks Independence Day, and you have a country full of Americans feeling super-patriotic.

So, let’s honor our country with some videos that express everlasting love for our country through song. These selections range from tear-jerking to downright bizarre.

Obviously, we have to kick things off with “The Star-Spangled Banner.” We’ve seen plenty of moving versions of this tune before, but here’s Indiana-based a cappella group the Gaither Vocal Band doing their rendition.

Of course, no matter how many sporting events we attend, no one knows every line of the National Anthem. Leslie Nielsen and the producers of the first Naked Gun movie belt out the tune using lyrics—and a key—that most “Average Joe” Americans are a little more familiar with.

3) Ray Charles does “America, the Beautiful”

Let’s face it: Ray Charles could sing anything—including “Gangnam Style” or “Call Me Maybe“—and it would sound awesome. Here he is on The Dick Cavett Show in the 1970s with his rendition of “America, the Beautiful.”

Years before they were selling out Broadway by lampooning the Mormon community, South Park creators Trey Parker and Matt Stone were entertaining and offending audiences with marionettes. Here are the stars of Team America: World Police and their very NSFW fight song.

One of the more beautiful—and original—pieces of patriotic music is Lee Greenwood’s “God Bless the USA.” First released in 1984, the song gained prominence during the Gulf War in the early 1990s and again after 9/11.

Yes, kids are cute, and patriotism is great. When you combine the two elements together, however, you unfortunately wind up with something that borders on terrifying.

8) Dennis Madalone, “America We Stand as One”

Independent singer-songwriter Dennis Madalone produced this moving—yet slightly overblown—tribute to America. As you sit mesmerized by his too-soulful lyrics, enjoy the fruits of his music video’s graphic designer, who was having way too much fun with the effects package.

“Back in America” was originally recorded for the end credits of National Lampoon’s European Vacation, the lackluster 1985 sequel to the original Vacation film. When combined with the images featured in the film’s end credits, it is a biting commentary on what we Americans now consider important.

Last but certainly not least… Only Hulk can lead us into battle in style.

Photo via The Q Speaks/Flickr