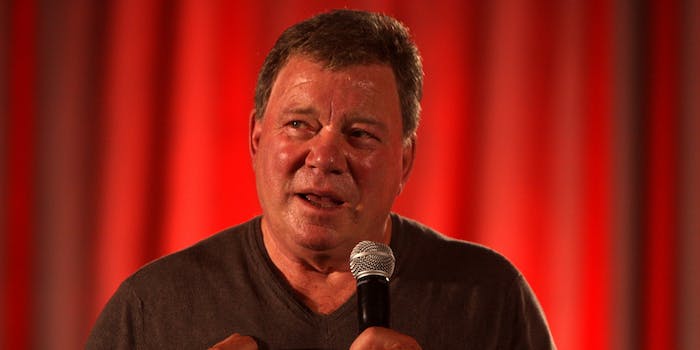 Teach William Shatner about technology by crowdfunding his new book

The 23rd Century starship captain admits that technology baffles him.

William Shatner is writing a new book, but he needs your help to make his dream a reality.

The 83-year-old Star Trek icon is turning to Kickstarter to help fund his latest tome, Catch Me Up. The book is meant to guide those over the age of 50 through important modern-day technology through interviews with young, technologically literate people. In addition to the book itself, Shatner will launch a companion website that collects success stories from around the web.

“Until just recently I HATED new technology,” Shatner wrote on the project page. “My ‘smart’ phone made me feel stupid. My grandkids had to show me how to use Facebook. I even refused to have an email account. You know what I found out? Without this know-how, I was becoming irrelevant…and a guy like me can’t afford to be irrelevant. So I did something about it.”

Backers of Catch Me Up are eligible to receive everything from digital and print editions of the book to a personal meet-and-greet with Shatner himself at the book release party in California.

Shatner has written several books already, both fiction and nonfiction, including an autobiography, several Star Trek novels, and the TekWar science fiction series. While his continued success and popularity would make him attractive to publishers, turning to Kickstarter is actually a smart move. After all, the gist of Catch Me Up is about becoming conversant in modern technology. What better way to continue to hone that skill than by crowdfunding your next project?

Besides, it won’t be the worst thing that Shatner ever did for money.