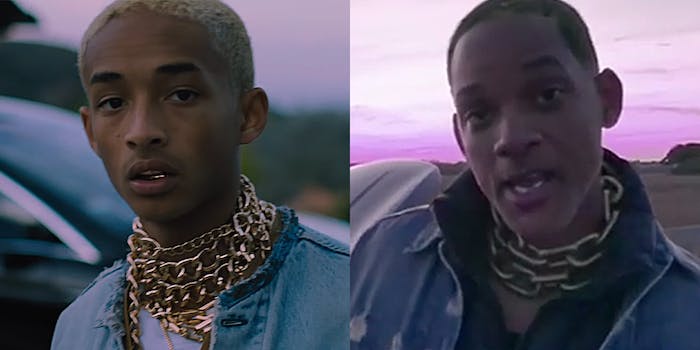 Jaden hits a streaming milestone, but Dad is here to cut him down to size.

Will Smith has only had Instagram for a month and a half, and he’s already better at it than the rest of us.

In a post Tuesday night, Smith celebrated the success of his son Jaden‘s song “Icon” with the ultimate dad joke: a shot-for-shot remake of its music video. Decked out in loose-fitting (potentially homemade) grills and a thick chain choker that looks like it came from the hardware store, the Grammy-winner had no trouble imitating his son’s serious smolder.

Jaden’s song recently reached 100 million streams on Spotify, so Smith’s homage to the music video is a congratulations e-card of sorts. It’s like a high-end version of that wholesome meme where parents imitate their kids.

“Congrats on 100,000,000 @Spotify streams, Jaden!” Smith captioned the video. “It is a delicious gift to a parent to admire his children. Keep doin’ you!“

Congrats on 100,000,000 @Spotify streams, Jaden! @c.syresmith It is a Delicious Gift to a Parent to Admire his children. Keep Doin’ You!

Your move, every other dad.