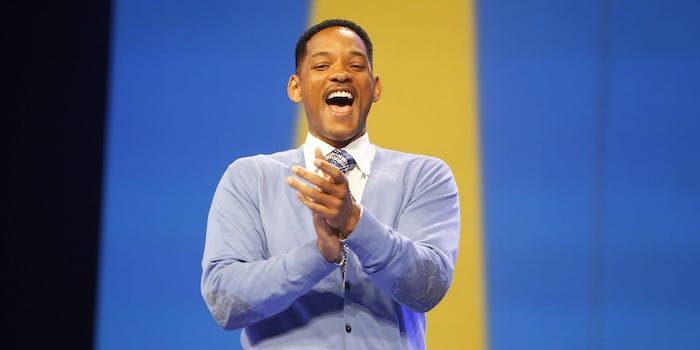 Will Smith—primarily known for starring in movies, the Fresh Prince rap, and fathering the two coolest humans to ever walk the planet—is starting a new chapter in his career: artist. Perhaps he was inspired by daughter Willow’s proclamation: “I mean, time for me, I can make it go slow or fast, however I please, and that’s how I know it doesn’t exist.”

Last night at the Getty Museum in Los Angeles, Smith unveiled his latest work for a group of exclusive guests. Museum attendants ushered elite guests into a dimly lit room, full of wildlife and half-destroyed computers, a strong statement about the tension between technology and the natural world. We sat cross-legged on the floor, eagerly awaiting the performance. And suddenly our ears were graced with the most beautiful and strange sounds:

Obviously influenced by the muddled sonic work of Bruce Nauman and referencing the way Kehinde Wiley plays around with race and pop culture in his iconic paintings, Smith layers his biggest hits on top of another, as if to ask the viewer: What does this all mean? By highlighting the similarity between his rap songs, he reimagines the simplicity of pop music as chaos. Mid-song, we are relieved from the chaos briefly. Smith tells us to “freeze.” What is he asking us to reconsider? Our blind adoration of his “greatest hits”? Or is it something deeper?

After the show, I asked Smith why he decided to make the switch from cinema to art.

“Willow changed everything for me when she said, ‘This is a fragment of a holographic reality that a higher consciousness made.’ At first I didn’t know what she meant. But then I read Baudrillard and it all made sense. Cinema, simulacrum, is not a copy of real, but is its own truth.”

“A sort of hypperreality, we can label it, although I’m aware of the futility of labels. But we have to accept the inherent disconnect between signifier and the signified.”

“So, why the switch from cinema to art?” I probed.

“Pop culture is dead,” Smith proclaimed. “And I am immortal.”

Smith giggled again. “It’s about ideas, bro. New ideas. People with ideas. People who believe in truth. And yes, as you probably could have guessed by this moment, I have decided in 2020 to run for president.”

There you have it folks. #WillSmith2020, anyone?

H/T Above Average | Photo via Walmart Corporate/Flickr (CC BY 2.0)