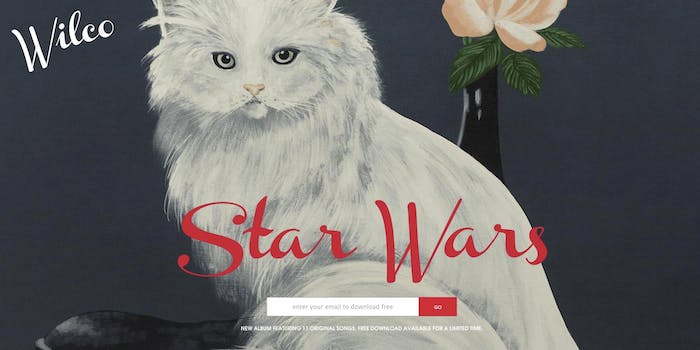 Sometimes, the best things in life really *are* free.

Since the release of 2011’s fantastic The Whole Love, Wilco seems to have prioritized touring over recording; it’s been four years since we’ve seen a new record from the band. That’s why it was surprising when they released a completely unexpected, full-length LP, entitled Star Wars,
on their website yesterday.

Wilco really wants you to download it, too. Try going to wilcoworld.net and accessing information on shows, or looking at their merchandise page. You can’t. Even manually typing in wilcoworld.net/shows will only briefly flash that page before redirecting you straight back to this:

It’s an unexpected move for a band: Blocking everything on their site that brings them profit and forcing you to look at the instructions for downloading their new LP at no charge.

Those instructions? You type in your email address, then you receive an email with a link to download the album in a .zip file. That’s easy enough, right? Here’s Jeff Tweedy’s explanation on Facebook.

It’s true. It probably is a really fun thing to do. But there’s another factor involved, and one that Wilco has experience with: It’s a really good thing for your fans to know your new music when they attend your shows.

When a management shakeup at Reprise Records in 2001 resulted in the label’s new executives deciding that Yankee Hotel Foxtrot was crap, and ultimately electing to give the rights to the album (which which would eventually receive universal acclaim, and end up on every ‘Best Of’ list in the country) back to the band for free, MP3s began to leak online. Wilco decided that the best way to combat bad-sounding pirated music was to just stream the the whole thing on their site for free.

Soon, fans at shows were singing along to these new songs, despite them not being available in any stores. It was a massive hit, one that would eventually cause Nonsuch Records to pay healthily for the official distribution rights in 2002. (Ironically, both Reprise and Nonsuch were subsidiaries of AOL–Time Warner, whose merger had originally lead to the album’s rights being handed back to the band.)

Despite the lengthy free-streaming period and the pirated copies that resulted from it, the album went on to sell 590,000 copies. It was a lesson for the band: If you have good music, get it to your fans, no matter what it takes. If that means shutting down your entire site and practically forcing them to download and listen to it, then that’s what you do.

And Star Wars is good music—in fact, it’s very good. It’s very Nels Cline-heavy, with his signature weird-but-still-catchy guitar style being the backbone of the bulk of the tracks. It feels extremely personal in a way that its name and title, which make it look like a Weezer album, seem to defy. It flows well, with minimalistic guitar hooks suddenly harmonizing with an array of instruments in a way that commandeers your foot and forces it to tap.

The bottom line is this: Just because it’s being offered for free at the moment, you’d be wrong to assume that it’s some low-effort, jokingly recorded nonsense. Quite the opposite: It’s a proper album that stands with Wilco’s best work.

With the band playing the Pitchfork Music Festival today (and touring throughout August), and becoming an increasingly jam-slanted presence on stage, it makes sense that they’d want to drop this new album on folks’ heads right now. They want people singing along when they play this stuff at upcoming shows. They want people familiar with them.

As to why they called this album Star Wars…who knows? Maybe they’re telling Disney that they’d like to sign with them in some capacity, as it seems unlikely that an album of that name would fly anywhere else. (When they signed with Nonesuch, a top priority for Tweedy was finding not only a label with a good stable of musicians, but also one that had the capacity to produce a ton of albums.) Or maybe it’s just called Star Wars because it, as Tweedy said, it “felt like it would be fun.”

Either way, seeing as how the whole site is currently redirecting to the download page with the blinking cat, we wouldn’t expect the album to be (legally) free for too long. At some point, they’ll need to open the merchandise and show info up again. So take the page’s “for a limited time” wording seriously and download the album ASAP. You won’t be disappointed—and it’s actually easier to get it this way than through torrents.