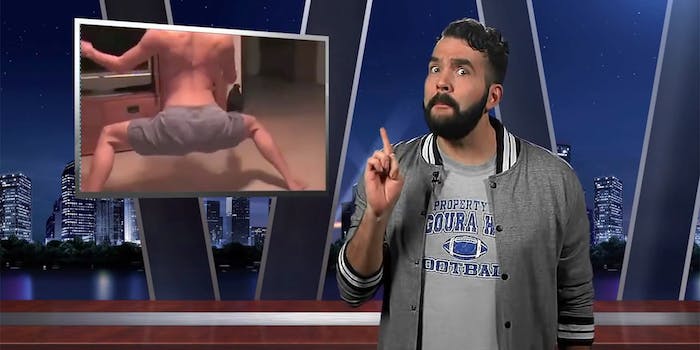 The best new gay comedy is airing on YouTube

Years from now, we might look back on Whoa, Dude! as some sort of watershed in gay comedy.

Years from now, we might look back on Whoa, Dude! as some sort of watershed in gay comedy. At its core is the germ of an idea that could be both relevant and interesting to a wider audience than just those that already identify with gay culture. That’s if anyone outside of those communities actually sees it.

Traditionally, to an outsider, gay comedy has been pretty terrible. But it isn’t hard to understand why. Anything that is produced under a cultural banner is immediately restricted in its content and a strange scenario arises where topics have to be spoken of or there is an implication that they are being ignored. Try being a novelist in South Africa and not mention race or Apartheid, for example. For purveyors of gay comedy (not to be confused with gay comedians) their targets seem limited to themselves and other gay people, and their narrative is almost exclusively their own experiences. This makes for a particularly exclusive art form.

What sets Whoa, Dude!, a series of five-minute YouTube clip shows in the vein of Tosh.O, apart is the engagement with and lampooning of straight culture. It is not just straights that feature in the “intentionally and unintentionally homoerotic videos,” but they are the butt of the joke for the first few episodes, a decision that I am sure was conscious.

The source of its humor is pretty simple. Seeing groups of frat boys, jocks, and military types gyrating and rubbing up on each other is funnier than it sounds especially as it interrogates that fine line between masculine swagger and homosexuality. Of course for this to work the viewer must have prejudged the groups featured and decided that they are likely to be homophobic, or at least ordinarily squeamish with male contact. Whether it is right to do this is immaterial, as frankly you’re probably going to do it anyway.

This sounds like basic stuff, but if you think about it, this is all pretty groundbreaking. Sure host and creator Jonny McGovern is more enthusiastic than actually funny on his own accord, but what he presents here is a cunning subversion of comedy that has come before it. For decades, homosexuals were mocked by comedians for acting ‘gay,’ so now it has so much bite when those that have been made fun of in the past return the favor in the same way.

Not that you should take this as some sort of retaliation; it doesn’t feel like that at all. This isn’t lashing out—it doesn’t come from a place of insecurity. It is light, fun, and isn’t nasty in the slightest. It is, however, inaccessible for those who aren’t gay. The title card alone is probably enough to turn most off, featuring a line-up of more six packs than I can appreciate as well as visible pubic hair. Sure I’m not the target market, and I’d be the last to suggest someone dilute their message, but it seems that with even the slightest paring back of some of its extraneous gay iconography this show could have wider appeal.

I have no idea whether McGovern wants this, but he should try and break out of his comfortable niche because he’s onto something. In an article for Out magazine last year Bret Easton Ellis blamed “The Gay Gatekeepers” (most prominently GLAAD) for putting forward to straight culture a homogenized version of homosexuality that excluded those that didn’t want to be a symbol for “Tolerance and Our Own Prejudices and To Feel Good About Ourselves” and those that are “real” and human (i.e. flawed).”

But here, GLAAD isn’t holding McGovern back, McGovern is. The format is his creation and it is his choice to package it in a way that will repel a lot of straight people. Is it because he isn’t confident making fun of straight people in an open forum? Perhaps. But when he has a man dance, naked only for an elephant thong behind him for no reason other than titillation, it serves not only to alienate those that would make his humor important but also weakens the intent behind his comedy.